The Economist’s Society is delighted to bring you their fourth and final Nobel Laureate of the year! 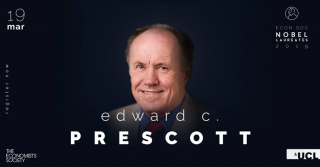 Ed Prescott was the 2004 recipient of the Nobel Memorial Prize, awarded for his work throughout his career on economic planning and the way that technological growth can account for much of the fluctuations in Real Business Cycles (RBC). Ranked as the 19th most influential economist in the world, Professor Prescott gained a PhD in economics at Carnegie Mellon University and has been teaching at Arizona State University since 2003. He has also served as an economic advisor to the Federal Reserve Bank of Minneapolis for 38 years. We are thrilled to welcome him to UCL for a fascinating talk drawing upon his extensive experience and insight in the field, which will focus on his contribution to RBC theory and its successful application.

Professor Prescott’s research revolutionized macroeconomics by developing new methods for studying business cycle fluctuations. These methods are applicable to all areas of aggregate economics. His other prize-winning work found that the best policy plan is time inconsistency and therefore will not be followed if policymakers have discretions, and that following a policy rule mitigates the time inconsistency problem. His most recent work is titled “On Financing Retirement with an Aging Population” and examines the problem facing many countries including the United States: how to finance retirement consumption as the population ages. His research has been published in Journal of Political Economy, International Economic Review, and the Journal of Monetary Economics, among other leading publications.