On 19 July members of the EMA and Institute for Name-Studies, Nottingham could be seen waving flares atop the Chiltern scarp in a bold experiment in landscape archaeology. They were testing the notion of transmitting a signal from early medieval beacon sites.

Lighting a flare on Ivinghoe Beacon

It is probable that beacons and lookouts played a key role in the networks of local and regional communications of Anglo-Saxon England during the Viking Age (ninth to eleventh centuries). Place-names with elements such as Old English weard and *tōt(e), denoting watchmen or lookout places, are widespread throughout southern England, but can be identified across the country. These places were likely to have been the locations of bonfires used to warn of threatened intrusions, particularly along the main well-established vectors of movement: long-distance roads, rivers, and the coast. Generally, bonfires have a limited range of visibility and so beacons need to be closely spaced only a few miles apart, but can an actual Anglo-Saxon beacon be proved to work?

It was decided to test this question by lighting emergency distress flares atop a selection of beacons comprising an Anglo-Saxon signaling chain along a major route-way. Luckily, work carried out as part of the Leverhulme Trust funded project Beyond the Burghal Hidage has identified many these. In close proximity to the Icknield Way in Bedfordshire and Buckinghamshire are three places with names indicating use as lookouts or beacons. Just north of Luton (Bd), is Warden Hill, recorded as Wardonhill in 1504, and almost certainly an instance of OE weard-dūn 'watch-hill'. From Warden Hill, several converging routes can be observed. Branches of the Icknield Way pass to the north and south, and the Ede Way crosses the Icknield Way near Galley Hill heading in a westerly direction. Both routes are intersected by the modern A6, the possible early route from Verulamium to Bedford. This is a nodal point in the local road network, and a lookout on Warden Hill would be able to watch for hostile movement from several directions.

Approximately 10 km to the WSW is Totternhoe (Bd). This place-name, Totenehou in Domesday, derives from OE *tōt-ærn-hōh 'hill-spur with a lookout-house', probably referring to the mound and earthworks on Castle Hill. It has commanding views over the plain to the north and west and is also within three kilometres of Watling Street, which passes to the east.

The third lookout place-name in the chain is Ward's Hurst in Pitstone (Bk), recorded in 1333 as Wardhurst. There is no way Ward's Hurst itself can be seen from either Warden Hill or Totternhoe, because it is on the wrong side of the hill-spur that gave its name to Ivinghoe. However, Ward's Hurst and nearby Ward's Coombe, respectively the 'wooded hill' and 'short valley of the lookout', are named from the lookout, but do not necessarily mark the site of that lookout: most likely Ivinghoe Beacon, a kilometre to the north. Ivinghoe Beacon (Bk), on the very scarp of the Chilterns, dominates the land below from the Vale of Aylesbury northwards. It also sits on the line of the Icknield Way so that Totternhoe and the weard at Ivinghoe Beacon between them guard the junction of Watling Street and the Icknield Way.

Landowners were contacted to ascertain whether they would allow their land to be used for the experiment; the civil aviation authority and local police forces were warned that flares were being lit. The results were partially successful. Totternhoe and Ivinghoe were clearly intervisible; even mid-day on one of the hottest days of 2016 flares could be seen between each beacon. Warden Hill, however, proved too distant to pick out a flare. Either fires needed to be much larger, or an additional beacon midway between Totternhoe and Warden Hill once existed but can no longer be identified. 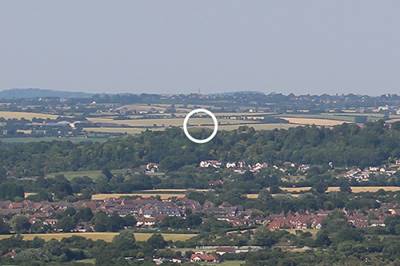 The flare on Totternhoe Beacon seen from Ivinghoe Beacon

In 2017, the plan is to widen the experiment further to include beacons further along the chain: Whorley Wood in Ellesborough (Bk); Beacon Hill in Lewknor (Ox), and Warren Hill in Nuffield (Ox).

No articles are available.