In this student prize work by one of Britain's most visionary 20th-century painters, the artist's mature style is instantly recognisable, the monumentality of his figures influenced by post-impressionism and Italian primitivism.

Spencer's The Nativity won first prize in the Slade Summer Composition Competition of 1912. It marks the end of Spencer's Slade studies and was a conscious attempt to paint a significant work to end his Slade career. The work was painted in Ovey's Barn, Cookham, in the summer vacation. Spencer's cousin Amy Hatch was the model for the Virgin. Spencer later explained the composition of this painting:

The couple occupy the centre of the picture, Joseph who is to the extreme right doing something to the chestnut tree and Mary who stands by the manger; they appear in their relationship with the elements generally, so that Mary to the couple in contact with one another seems like some preonderating element of life, just another big fact of nature such as a tree or a waterfall or a field or a river. Joseph is only related to Mary in this picture by some sacramental ordinance... This relationship has always interested me and in those early works I contemplated a lot of those unbearable relationships between men and women. (Tate Gallery Archive, 733.2.85)

Despite this commentary the identities of, and relationships between, the figures remain opaque. Most commentators have considered that the embracing couple symbolise earthly love in contrast to the spiritual connection between Mary and Joseph. Spencer's comment may indicate that it is the tension between the physical and the spiritual in relationships between men and women that renders them unbearable. Also important is the relationship between man and nature, expressed by Spencer in terms of the interaction between the figures and the landscape. Spencer always expressed his ideas in relation to landscapes which had a particular significance for him. Like many of his paintings The Nativity is set in Cookham and is imbued with Spencer's ideas of the spiritual significance of place.

Although The Nativity is unusual in being a student prize work in which the mature style of the artist is instantly recognisable, the painting draws on a diversity of different artistic sources including the Pre-Raphaelites, and the Italian Primitives. The monumentality of the figure of Mary and her mask-like face also recalls the work of the Post-Impressionists. Spencer attended the Slade lectures of Roger Fry from 1909 and could have seen their work at the exhibition Manet and the Post-impressionists organised by Roger Fry at the Grafton Gallery in 1910-11. Spencer's own John Donne Arriving in Heaven was included in the second Post-Impressionist exhibition organised by Fry at the Grafton Gallery in 1912. Spencer merged this plethora of influences into a distinctive individual style, and in a letter to the Spencer family Tonks wrote: 'In some ways he has shown signs of having the most original mind of anyone we have had at the Slade and he combines this with great powers of draughtsmanship'. (quoted in Marice Collins, Stanley Spencer: A Biography, London, Harvill Press, 1962, p.39) 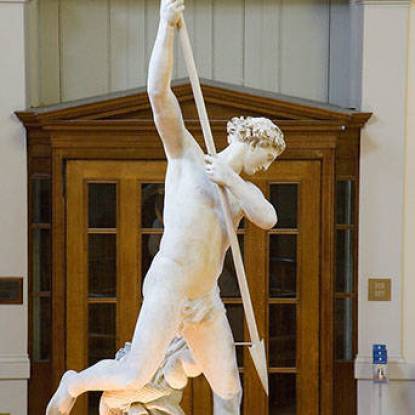 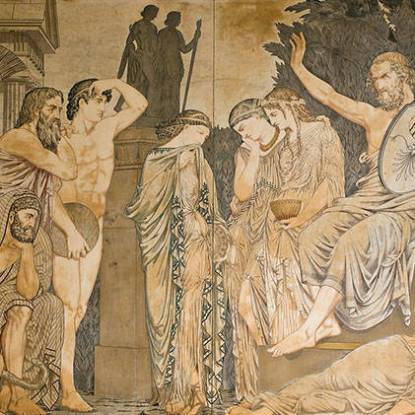