Papyrus for the People

An overview of the project. 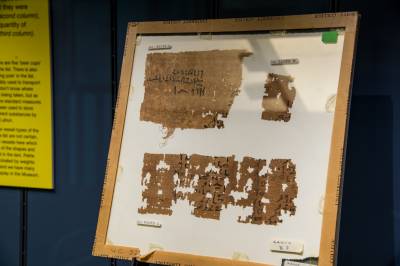 The project aimed to improve understanding of, access to, and care of the museum’s  collection of ancient written texts on papyrus and pottery/stone fragments (ostraca). By improving the understanding of this valuable material, promoting its relevance, and celebrating its significance the project demonstrates the long-term future sustainability of such specialist museum collections as The Petrie collections. 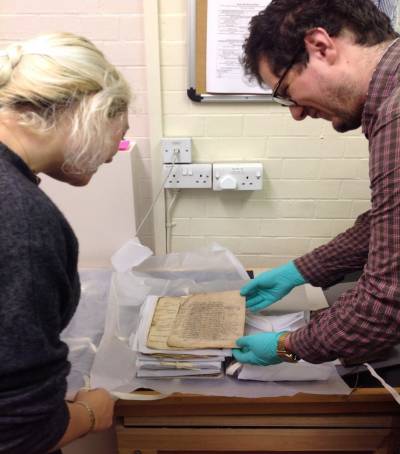 A key aim of this project was to make translations of these ancient texts more accessible to and more understandable for a wider audience including public audiences. Working with a group of specialists in ancient texts (Hieratic, Demotic, Greek, Coptic & Arabic) an initial scope of the character of the written material in the collection was identified, summarised and technical accounts published to improve database records with non-specialist users in mind. Translators collaborated with the project team to identify examples that have the potential for exhibition and open access publication. Creating clearer paths into searching online are in progress to allow for stimulating research into gender inequality, and sexuality allowing a broader range of use from across the disciplines at UCL and external including art and drama and external source communities. Accompanying higher quality photography of newly conserved papyri has also been a priority to be made fully accessible on the online database to accompany more user-friendly descriptions, further facilitating the opportunities for future research from those unable to visit the museum. 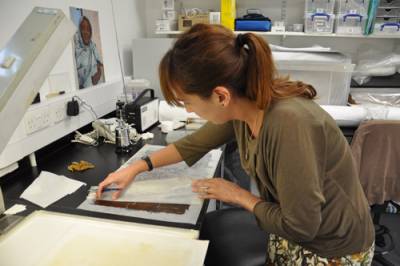 Specialist conservation work was carried out to re-tape the glass to protect those accessing the papyri from the glass jagged edges. The pottery stone fragments of ostraca have now been packaged into plastazote a soft casing material minimising damage to the objects as drawers are opened and closed. For papyri not on display new visible storage units are now in place which provide a safe conservation environment making access to them much easier for staff and researchers alike.

New cases for the display of the papyri are also in place offering news ways of linking the papyri texts with objects in the collection demonstrating the importance of the value of ancient texts in evidencing objects and their use. The current exhibition looks at the role of women in Ancient Egypt and links pottery examples to references in papyri. 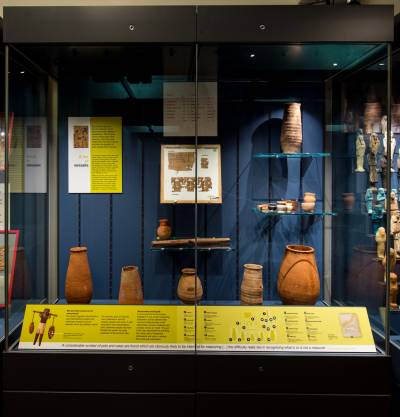 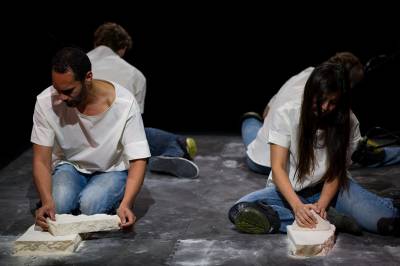 The newly translated papyrus collections have offered rich and varied source material for a diverse set of collaborators. There have been open evenings and days for general public offering a chance to find out about what papyri and ostraca are, what materials are they are made from and what do they tell us. These behind the scenes events offered a glimpse of working practices in a museum and a chance to ask questions to the project team directly.

Family activities run during the summer holidays in 2017 focused on offering a chance to make your own shadow puppet and a chance to be creative and imaginative and explore the nature of storytelling in ancient Egypt.

Readings of actual papyrus tales in a performance format ran during the 2017 October half term for both families in the afternoon and for adults in the evening. The format brought the stories to life and gave insight into the role of these texts in ancient Egyptian culture. Halloween in October 2017 provided a chance to look at examples of film, television and literature that went influenced by papyrus narrative tales and references to cursing, spells and incantations. During November and December 2017 ‘Curses!’ ran in collaboration with Bompas & Parr, alumni of UCL, who took the idea of cursing and threat found in papyri to produce an innovative and immersive audio tour ending in a cursed experience. This proved very popular and bought a completely new audience to the Petrie. The launch night offered talks and workshops inspired by the context of papyri from making your own curse doll

and delivering a threat! These sessions proved very popular and generated more knowledge and understanding on the difference between cursing and threats in an ancient context. A series of Lost Skills workshops (Nov- Dec 2017) focused on the nature of some of the papyri that offered insights into shopping lists, wills and letters that have similarities with contemporary life. Working with UCL academics from legal, psychology and letter archivists, we ran a series of lunchtime sessions on the art of letter writing and the psychology of list making.

Our ‘Women in Egypt’ event (March 2018) tied in with the Suffrage centenary and the Vote 100 celebrations, gave an insight into the role of women in ancient Egypt outside the home as referenced in the papyri. Two performances inspired by the papyrus unveiled a new piece from performance artist Laura Wilson’s residency at the Petrie 2017/18. The project gave Laura a chance to work with conservators, translators to explore and produce a piece based on one specific text relating to stone quarries and workers. Entitled ‘The Stone Draggers, 2018’, the work explores the nature of the papyri, many of which describe labour, crafts people and every day human interaction. University of East London MA drama students have worked with the project team to produce 'Revival: performing papyrus'; a series of devised pieces created by the MA students as a response to The Petrie Museum's new papyrus exhibition. These pieces re-interpret and re-stage narratives found within the collection of papyri, as well as interpreting issues connected to the exhibition such as Margaret Murray's research on British witchcraft, and ancient Egyptian forms of ritual. In May, Central St Martin’s unveiled their art works in an exhibition inspired by their exploration of both the content of the papyrus and the conservation of materials in museums.

Coming to see us?
Get directions to:
Our Petrie Team
Subscribe to our newsletter