Take me to:
at:
Let's go
Let's go
Fake News: Demystifying Jeremy Bentham
Almost everything you’ve heard about the auto-icon of Jeremy Bentham is not true 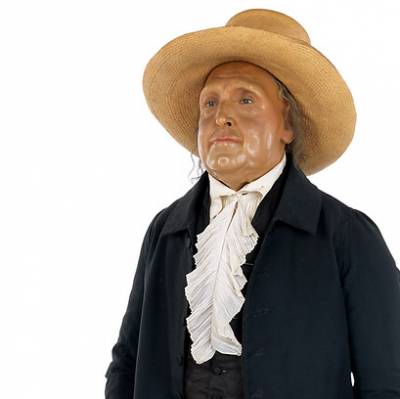 In 2018, UCL welcomes back the famous auto-icon with Fake News: an exhibition in the university's South Cloisters that reveals the myths surrounding Jeremy Bentham.

When UCL included Jeremy Bentham’s preserved head in our exhibition What does it mean to be human? in 2017, there was a surge in interest in the utilitarian philosopher and the story of how his body came to be at UCL. We were thrilled when the exhibition was featured on the popular, satirical TV panel show Have I Got News For You!, reaching a huge audience.

That was, until we heard what they had to say. We listened, powerless, as the host and panelists reeled off every myth ever told about Bentham.This, and other media coverage of the exhibition, brought home a painful truth for those of us who work with Bentham at UCL: almost everything you’ve heard about the auto-icon of Jeremy Bentham is not true.

This exhibition aims to set the record straight.

Jeremy Bentham did not leave his body to UCL

When Bentham requested his body be dissected and preserved following his death, it was a deliberate and radical political statement to highlight the shortage of cadavers available for medical study.

How the resulting ‘auto-icon’ came to be at UCL is a historical accident. In Bentham's final will, made only a week before his death on 6 June 1832, he left his corpse to his friend and disciple Dr Thomas Southwood Smith, whom Bentham requested take ‘appropriate measures for the disposal and preservation of the several parts of my bodily frame’. On 9 June 1832 Bentham’s body was publicly dissected b yanatomist Richard Grainger, before an audience of invited guests at the Webb Street School of Anatomy. Standing over Bentham’s corpse, Dr Smith gave a public lecture in praise of the life and thought of his friend. By giving his body to medical science, Smith contended, Bentham had in death, as he had in life, sought to promote the principle of utility.

Despite the passage of the Anatomy Act of 1832 just over a month later, Bentham’s wishes for his remains to be disposed of in this way would have been a hugely controversial act, and a strong public statement of both Smith and Bentham’s belief in the utility of the dead body. Smith subsequently saw to the preservation and reassembling of the skeleton and, according to Bentham’s wishes, had it dressed in a suit of Bentham’s own clothes. The auto-icon is surmounted by a wax head, created by the French sculptor Jacques Talrich, after the preservation of Bentham’s real head did not produce acceptable results.

The fact that Bentham’s remains – what he termed the ‘auto-icon’ or ‘self-image’ – is on display at UCL is a historical accident. Dr Smith kept the auto-icon at his consulting rooms until 1850, when it was presented to UCL. The College did not immediately display the auto-icon, much to Smith’s disdain. 'Any one may see it who enquires there for it,' he wrote, 'but no publicity is given to the fact that Bentham reposes there in some back room. The authorities seem to be afraid or ashamed to own their possession.'

Jeremy Bentham did not found UCL

It is widely believed that Bentham was one of the founders of UCL (originally known as the London University). This is not true. Bentham was eighty years old when the new University opened its doors in 1828, and was not personally involved in its foundation.

A key factor perpetuating this myth is a mural painted by Slade Professor Henry Tonks, in the dome above the Flaxman Gallery in the UCL Main Library. What Tonks painted was a metaphor, paying homage to Bentham and his liberal philosophies, and the influence these had on the founders of UCL. Painted in commemoration of the centenary of the London University (as UCL was originally known) this mural shows a fictional meeting where William Wilkins (1778-1839), the architect of the main building, is submitting his plans to Bentham for his approval while the portico is under construction in the background. Also present are some of the founders of UCL: Lord Brougham, Thomas Campbell, who first conceived the idea of a London University, and Henry Crabb Robinson. Not pictured is James Mill, who played a key role in the project.

In choosing to place Jeremy Bentham at the centre of this work, Tonks perpetuated the idea of Bentham as one of the founding fathers of UCL. It is true that Campbell, Brougham, Crabb Robinson and others were strongly influenced by Bentham and his belief that access to education should not be made subject to a religious test. When it was founded, UCL was referred to as the ‘Godless College of Gower Street’.  Bentham was 80 by the time teaching began at the University, and, while he gave the venture his backing by purchasing Share No. 633, he contributed little else to the actual founding of UCL.

Contrary to assertions that the auto-icon is wheeled into UCL Council meetings, and it is minuted that at such meetings Jeremy Bentham is ‘present but not voting’, no such practice takes place regularly at UCL.

There has, however, been a single, exceptional case where we can prove the myth became reality. In 2013, as a surprise for Dr Malcolm Grant, we arranged for the auto-icon to attend his final Council meeting as UCL’s Provost.

No one has ever played football with Bentham's head 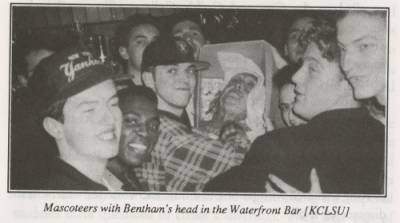 It is frequently said that Bentham’s head has been stolen more than once by students from King’s College London and used for an impromptu game of football in the college Quadrangle.

Bentham’s preserved head is in a delicate state, and would quickly disintegrate if anyone kicked it.

The head, was, however, kidnapped by King’s College students in October 1975. The matter was resolved by a £10 donation to the charity Shelter, and the head was returned unharmed. The model wax head of the auto-icon has also been taken by students from King’s, as this 1990 photo shows.

Truth is stranger than fiction

The Fake News exhibition was curated by Subhadra Das. The auto-icon of Jeremy Bentham is managed collaboratively by UCL Culture and the Bentham Project. Together, we work to engage people with and research Bentham’s work and philosophy. Our first-hand encounters have proved to be just as interesting as the Bentham myths.

In the last year since we put Bentham’s preserved head on display, we have carried out a full conservation audit of the auto-icon –  confirming it is wearing underwear and two pairs of socks – and lent the auto-icon to an exhibition at the Met Breuer in New York. We have also recently discovered that Bentham may have visited University College when teaching started here in 1828.

Since it arrived 1850, the auto-icon has been a physical focus for stories about Jeremy Bentham and UCL. This exhibition has shown that most of these are not true, but the auto-icon remains the focus of our collective attention, regardless. We hope it always will.

See Fake News in the university's South Cloisters until September 2018.

Coming to see us?
Get directions to:
Fake News
Subscribe to our newsletter