One of the highlights in the UCL public engagement year is the Provost's Awards for Public Engagement. This takes place every year in the spring and recognises the fantastic work that UCL's staff and students do to open up research and teaching at UCL to the wider world by engaging with communities.

There were seven winners earlier in the year – which you can read about here but we had over fifty nominations from across UCL.  With such a wealth of projects, we didn’t want to miss an opportunity to shout about this work – which is all amazing.   So we decided to run this new news feature - the Provost Awards Spotlight.  This feature will run throughout the rest of the year in the run up to the next Awards, and will tell the stories of these individuals using their platform at UCL to mobilise, inspire and amplify.

This month we’re featuring Virginia Mantouvalou, reader in Human Rights and Labour Law. She has been working with a London charity Kalayaan which works to provide practical advice and support to, as well as campaign with and for, the rights of migrant domestic workers in the UK.In 2015, the UK granted 17,352 visas for domestic workers, doing jobs such as cleaning, nannying and cooking. The vast proportion of these workers are women from countries such as the Philippines, India, Indonesia and a majority of them begin their employment outside the UK with families in the Gulf. It is when these families visit the UK bringing their staff with them, that UK employment law comes into effect. Though it’s not employment law as you know it. 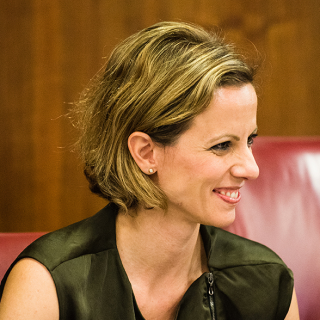 We asked Virginia what her research involved:

“It is a study consisting of interviews with overseas domestic workers who are in the UK under a visa system that is linked to ‘modern slavery’. This is an extremely difficult group of workers to reach for numerous reasons (an invisible, sometimes undocumented, very fearful workforce, employed in private households).”

It seems hard to believe, but as a domestic worker from overseas, you could be expected to work any hours of the day, for far less than national minimum wage. In a report by Kalayaan in 2010, 48% of overseas domestic workers worked at least 16 hours a day, and 56% received a weekly salary of £50 or less.

These workers are in a position that is uniquely vulnerable. They may have poor levels of English, and are unable to access the little support that does exist. In many cases they simply do not know their rights, but it’s not just a lack of information. The laws surrounding this group have only further compounded the situation.

Between 2012 and 2016, their visas were dependant on the single employer with whom they entered the country. If they left their job they would be actively prevented by UK laws from finding another, in what was an attempt by the government to reduce net migration. This forced many into undocumented work and the potential for further exploitation.

Despite this, many have taken their chances and fled. In 2014 Virginia begun the difficult process of interviewing some of these individuals,

“Meeting these workers, building a relationship of trust with them, trying to address their fear and anxiety, and, perhaps above all, hearing their stories, which were often devastating, was a really difficult experience for me. I was really glad that I could give them a voice through my publications.”

As one Kalayaan interviewee described:

“I ran away. I left them sleeping… I packed my things and ran away without any documents, without any pocket money. I just had my stuff and myself that cold night.” (Bianca, migrant domestic worker)

And it’s easy to see why. Among workers who registered with Kalayaan between 2012 and 2015, 81% were given no time off during their employment. In some cases workers reported not being allowed to leave the house unsupervised, having to sleep on bathroom floors, and surviving on scraps of food left over from their employers’ meals.

In March 2015 after much publicity, the landmark Modern Slavery Act was passed to try to protect workers. This enabled overseas domestic workers the right to find a new employer, but only to work in the UK for a total of six months. For many having fled abusive workplaces, this was too little time to find anything else.

Shortly after the Modern Slavery Act was passed, the government called for an independent review of the visa system to investigate claims of modern slavery. The review recommended that the six-month limit on visas be lifted. This recommendation has still not be implemented, and a national minimum wage is still not required by law.

According to government advice that can be found online:

“If the applicant is not a member of the employer’s family but they live in their home they will not qualify for National Minimum Wage for work done for their household if they are having meals and accommodation provided free as if they were a family member.”

This phrasing is very much open to interpretation.

The research that Virginia continues to undertake with Kalayaan has become a unique resource, and has been debated in Parliament.

Virginia is a model of academic activism; not only acting as a volunteer advisor on labour law and human rights, her collaborative partnership with Kalayaan has helped shape new research questions that she is addressing in her scholarship. For this reason she was one of our winners this year.

She is Co-Director of the UCL Institute for Human Rights, a member of the Editorial Committee of the Modern Law Review, and was previously joint editor of Current Legal Problems. Before joining UCL, she taught at the University of Leicester and the London School of Economics. She has also been Dean’s Visiting Scholar at Georgetown University Law Centre in Washington DC.In 2016-17 she was a specialist advisor to the UK Joint Committee on Human Rights on ‘Business and Human Rights’. She teaches on human rights and labour law courses, and is the Director of Graduate Research Studies in the Faculty of Laws. 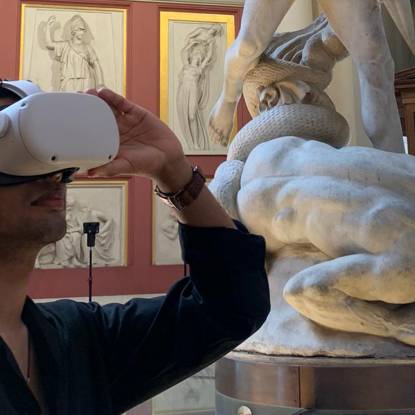 Virtual Reality in museums
[[{"fid":"15261","view_mode":"large","fields":{"format":"large","field_file_image_alt_text[und][0][value]":"Virtual Reality in museums project image","field_file_image_title_text[und][0][value]":"","field_caption_heading[und][0][title]":"","field_caption_heading[und][0][url]":"","field_caption[und][0][value]":"","field_float_left_right[und]":"none","field_file_image_decorative[und]":"0"},"type":"media","field_deltas":{"1":{"format":"large","field_file_image_alt_text[und][0][value]":"Virtual Reality in museums project image","field_file_image_title_text[und][0][value]":"","field_caption_heading[und][0][title]":"","field_caption_heading[und][0][url]":"","field_caption[und][0][value]":"","field_float_left_right[und]":"none","field_file_image_decorative[und]":"0"}},"attributes":{"height":"1080","width":"1920","class":"media-element file-large"}}]]New Knowledge Exchange project between the Bartlett, UCL Culture and tech start-up Kagenova explores Virtual Reality (VR) in Museums.We are excited to announce a newly funded knowledge exchange project exploring VR in museums led by UCL Culture with The Bartlett Centre for Advanced Spatial Analysis (CASA) and AI technology start-up Kagenova, founded by UCL scientists.    The project enables these highly specialised teams to come together to share ideas, experiences and skills to support innovation in VR in the museum sector.    Kagenova has developed new technology out of the exploration of the unknown horizons of the night sky by UCL scientists in astrophysics. They're developing technology to provide photo-realism and interactivity in VR, at the same time and at scale. These new immersive technologies are powered by Kagenova’s geometric AI techniques, which are tailored specifically to VR. "We're excited by this knowledge exchange partnership to help explore how technology could be used to support cultural exhibitions and make them more accessible", said Jason McEwen, Founder and CEO of Kagenova, who is also a Professor of Astrophysics at UCL.   The collaboration explores the ways in which virtual exhibitions captured in this way can enhance the student learning experience (blended and online). This is for the benefit of both UCL and the wider Higher Education community, as well enabling the general public to engage with collections in new ways, wherever they are in the world. The findings from this project will be particularly beneficial for smaller museums, who often don’t have the budget or infrastructure to compete with national museums when developing new digital products and services.   The collaboration with Kagenova enables UCL Culture to experiment with next generation 360VR technology. UCL’s museums have been pioneering collections and exhibitions-led interdisciplinary research and inquiry for over a decade. “Our exhibitions are integrated into the learning experience in different ways and we want to bring this pedagogical know-how into conversation with technology in a way that can bridge students’ onsite and remote learning experiences as well as connect with our remote audiences”, says Dr Nina Pearlman, Head of UCL Art Collections, who has been the strategic lead for this project. “Collaboration supported by knowledge exchange funding is key to being able to identify novel ideas that can help us design better solutions, services and experiences to meet our current challenges.”   Researchers in UCL CASA have been exploring virtual environments for many years with a focus on technological innovation and accessibility, nurturing the next generation of developers and technology innovators. Professor of Digital Urban Systems, Andy Hudson-Smith, stated that: “The collaboration brings the ability to explore the edges of the technology, from multisite portals through to 3D objects embedded in the panoramic scenes and integration into emerging metaverses. All with a direct loop back into teaching and research at UCL”.   Building on UCL’s strength in innovation, the learnings from this project will be disseminated and shared across cultural and technology networks, social media and press. Without this project, these learnings would be either logistically impossible or prohibitively expensive to achieve individually.  This knowledge exchange project is supported by UCL’s Higher Innovation Fund (HEIF), managed by UCL Innovation & Enterprise. The partnership between UCL Culture, UCL CASA and start-up Kagenova has been facilitated by the Business and Innovation Partnerships team within UCL Innovation & Enterprise. 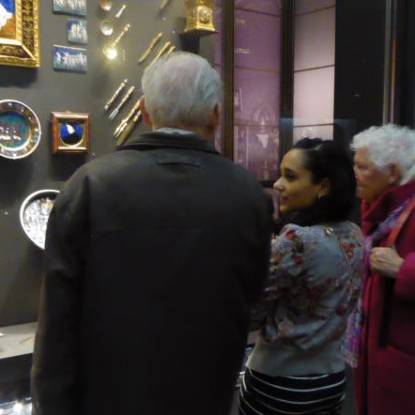