The Provost's Awards for Public Engagement takes place every year in the spring to recognise the fantastic work that UCL's staff and students do to open up research and teaching at UCL to the wider world by engaging with communities.

There were seven winners earlier in the year – which you can read about here – but we had over fifty nominations from across UCL. With such a wealth of projects, we didn’t want to miss an opportunity to shout about this work – which is all amazing. So we decided to run this new news feature - the Provost Awards Spotlight.  This feature will run throughout the rest of the year in the run up to the next Awards, and will tell the stories of these individuals using their platform at UCL to mobilise, inspire and amplify.

Our first Spotlight is on Rafael Prieto Curiel, a mathematician from Mexico. Rafael worked for the Police Department in Mexico City before coming to UCL, first for a Masters in Statistics (2013-2014) and then decided to carry on with a PhD in Mathematics and Crime. Alongside his studies, Rafael has created Chalkdust – a magazine “for the mathematically curious”, and we wanted to know more.

The magazine - now in its fifth issue - brings the world of mathematics to a broad audience through fun how-to guides, articles and interviews. There’s something for everyone, from the light-hearted, ‘What’s your least favourite number?’, to the delicious-sounding, ‘Croissant equation’ to ‘Linear Algebra… with diagrams’ and all sorts in-between.

It’s also pretty surreal. One of our favourite regular features is that of 19th century mathematician Johann Peter Gustav Lejeune Dirichlet, who makes an unlikely return as Chalkdust agony aunt in the ever-popular Dear Dirichlet column. He’s helped readers with their feelings on free-market capitalism and awkward social interactions, and is mildly obsessed with badgers. Who knew?

We asked Rafael why he started the project and why it continues to be important,

“It matters because of the impact it has. We sometimes work with the authors (particularly the younger ones) to create an article with them. We’ve published A-Level students who wouldn’t easily be able to publish an article in a maths journal or magazine.”

Giving students their first experience of being published is a great way to both build confidence and to engage with the next generation of maths whizzes. It’s also acted as a pull for prospective new students to UCL. One Chalkdust contributor told Rafael, he wasn’t sure whether or not to accept the place he was offered for his PhD but then saw the magazine, “I realised UCL would be a great place to study when I learnt about Chalkdust, a magazine produced by students here”. Chalkdust demonstrates a fantastic way to share ideas outside of lectures and a way to get new students excited about their subject. But it’s not just UCL bods getting in on the action….

Chalkdust works through submissions, and receiving them is one of the most exciting parts of the process for Rafael, “People from different parts of the world have sent us articles that could be published by us and that is precisely one of our aims: to create a space for everyone to share maths”. This formula seems to be working - since its start, Chalkdust has published the work of 70 different authors, generating over 260 articles, produced by 40 undergraduate and postgraduate students, who have circulated 15,000 copies, and distributed to over 25 UK universities!

Despite this momentum, Rafael has had concerns for the project. He told us, “Chalkdust  is  an  ongoing  project,  so  there  were  two  challenging  parts: beginnings and  endings. In  order  for  our  project  to  survive,  we  strongly  depend  on  recruiting  new members  of  the  team,  since  we  are  all  students  and  we  will  all  finish  our degree at a certain point.”. This highlights a common problem in volunteer projects, how do the original members ensure the project lives on, even after their departure? Rafael remains optimistic however, and has been investing time in the next generation to equip them with the skills and encouragement to flourish. He hopes this will protect the project’s future,

If you would like to read Chalkdust’s articles, or contribute to the next issue, Rafael wants to hear from you – so visit the website and see how you can get involved www.chalkdustmagazine.com. 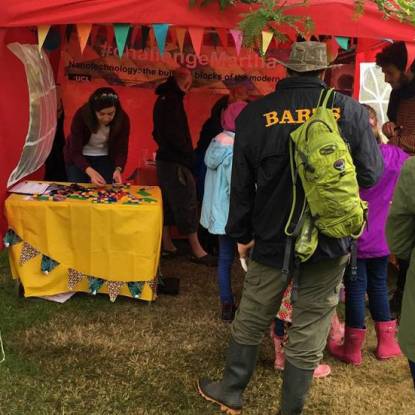