Though Jeremy Bentham is credited as the inventor of the infamous Panopticon prison scheme, the idea behind it—the ‘central inspection principle’—originated with his younger brother, Samuel.

Jeremy adapted Samuel’s idea, seeing the Panopticon as a ‘new mode of obtaining power of mind over mind’ which could be applied to a wide range of institutional settings where supervision was required, such as hospitals, factories, schools, and asylums. However, it was as a prison that the Panopticon is best known. Bentham envisaged it as a circular building with the prisoners’ cells arranged around the outer wall, and an inspection occupying the centre. From this tower, the prison’s inspector could look into the cells at any time, though the prisoners would be unable to see the inspector. The prisoners would therefore have to assume that they were being watched at all times and behave in order to avoid punishment if they breached the Panopticon’s rules.

Bentham wrote the original ‘Panopticon Letters’ in 1786 while visiting Samuel in Russia, and followed this with the ‘Panopticon Postscripts’, written in 1790 and 1791, which refined the scheme. For about a decade until 1803, Bentham spent a great deal of time, money, and energy, in an unsuccessful attempt to persuade the British government to build a Panopticon prison, with him as the inspector. The failure of the scheme was the greatest disappointment of Bentham’s life and was a formative episode in his intellectual development. In his mind, the Panopticon scheme was thwarted by politicians liable to manipulation by ‘sinister interests’, and motivated him to set out a radical programme of reform of the legal, political, and ecclesiastical establishments during the final decades of his life. No prison which strictly adheres to Bentham's design has ever been built. 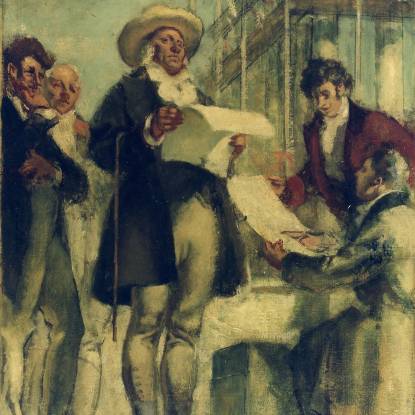