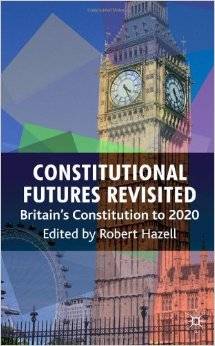 The UK is going through a period of unprecedented constitutional change. Where are these changes taking us? Will devolution lead to Scottish independence and the break up of the UK? Will a British bill of rights lead to yet more power for the judges? Will there be electoral reform at Westminster? And will this mean more power for Parliament, or less?

In Constitutional Futures Revisited: Britain's Constitution to 2020, leading political scientists and lawyers forecast the impact of these changes on the UK's key institutions and the constitution as a whole. The book, published by Palgrave, is an indispensable guide for policy makers, lawyers and judges, the media, academics, students, and anyone interested in the future of the UK's political landscape.

'We used to think of the British Constitution as having an illustrious past but not much of a future. The last 10 years have changed all that. The question for lawyers, constitutionalists, politicians, and the public at large is now: where will (and should) it all end up? That is the question this valuable book answers.' Lord Bingham, Senior Law Lord

This project is supported by the Nuffield Foundation.