Professors Alexandra Silva and Yvonne Rogers, of UCL Computer Science, have been chosen to receive a prestigious award celebrating the achievements of women in STEM.

Professors Rogers and Silva will be honoured at the third Suffrage Science Awards for Mathematics and Computing online celebration on Friday 6 November 2020.
Over one hundred years after the first women in Britain got the vote, women still make up only 24% of those working in core science, technology, engineering and mathematics occupations in the UK (1).

Solving the ‘leaky pipeline’ issue is a long-term challenge for maths and computing. Recent data has revealed that women make up just 13% of students studying computer science or related university courses in the UK. When you compare that figure to other STEM related courses, the stark contrast becomes evident. Women studying biology total 61% and of students studying chemistry, 44% are women. There is a similar lack of females studying mathematics courses – a total of 36% of students (2).

On Friday 6 November 2020, 11 mathematicians and computer scientists, who work in STEM fields across the world, will be recognised for their scientific achievements and the work they do to promote maths and computing for the next generation. The Suffrage Science awards scheme, curated by the MRC London Institute of Medical Sciences, celebrates women in STEM subjects, and encourage others to enter scientific fields and reach senior leadership roles.

The 11 awardees are chosen by the previous award holders for their scientific achievements and ability to inspire others. This scientific “relay” takes place every two years, and creates an inspiring network of women connected by their link to the scheme.

The awards themselves (see image below) are hand-crafted items of jewellery created by art students from Central Saint Martins-UAL, who worked with scientists to design pieces inspired by research and by the Suffragette movement, from which the award scheme takes its name. 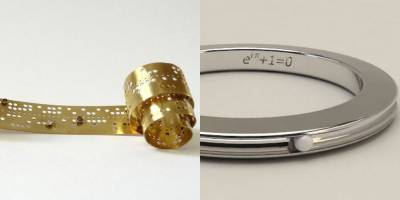 At this special “virtual” handover event, award-winning science writer, author and broadcaster, Dr Kat Arney, will lead a discussion on central themes of 2020, in particular the COVID-19 pandemic and the Black Lives Matter movement. A panel of three will discuss the implications of both for women STEM.

The Suffrage Science scheme was initiated by Professor Dame Amanda Fisher, Director of the MRC London Institute of Medical Sciences, in 2011.

Professor Fisher said: “The creation of the Maths and Computing Suffrage Sciences Awards in 2016 recognised the increasing importance of mathematics and computing to the life sciences. As in all branches of the awards, their purpose is to celebrate women scientists, their scientific achievements and ability to inspire others. This is especially important in maths and computing, where women students studying these subjects are still in the minority. We are delighted to welcome this year’s awardees into the growing Suffrage Science community of over 130 women from across the globe, and look forward to supporting them to inspire the next generation.”

““Alexandra is an outstanding scholar, as witnessed by the Presburger award, the Needham award and a Wolfson Fellowship for her work in algebra, semantics and computation. Moreover, as well as acting as a wonderful role model, she actively promotes the careers of early career researchers, particularly female early career researchers.”

““Yvonne is not only a top computer scientist with a background mix of CS and Psychology with a significant number of awards, publications (over 250 papers and her book Interaction Design: Beyond Human-Computer Interaction has sold more than 150,000 copies worldwide) she leads the University College London Interaction Centre at UCL. I worked with her when we both PI'ed the ICRI in Urban IoT for Intel and learned so much about my own subject from her regarding the user and human aspects of sensing systems and how they are or should be used. This incentivised me to start to explore the more ethical sides of my work (privacy etc.). She is super influential internationally but what I'm impressed by is that she thinks differently and brings new questions to the subject- she makes one think. She is a champion for more women into computing and has guided many computer scientists to their own successes.”

UCL Computer Science congratulates Alexandra and Yvonne on their success!

The Suffrage Science jewellery was created by art students from Central St Martins-UAL, who worked with scientists to design pieces inspired by research and the Suffragette movement, from which the award scheme takes its name. The Maths and Computing 2020 awardees will be celebrated at a virtual event alongside the 2020 Life Sciences recipients on 6 November 2020.

2. Data from HESA data and analysis of all students by subject area and sex, data referred to is percentage of female students who enrolled in the first year of their full-time first degree in the UK https://www.hesa.ac.uk/data-and-analysis/students/what-study