Professor Peter Kirstein was a remarkable individual. He was a dear friend and colleague to many at UCL Computer Science; the department he founded. In honour of his birthday, a reminder of his life and extraordinary experiences. 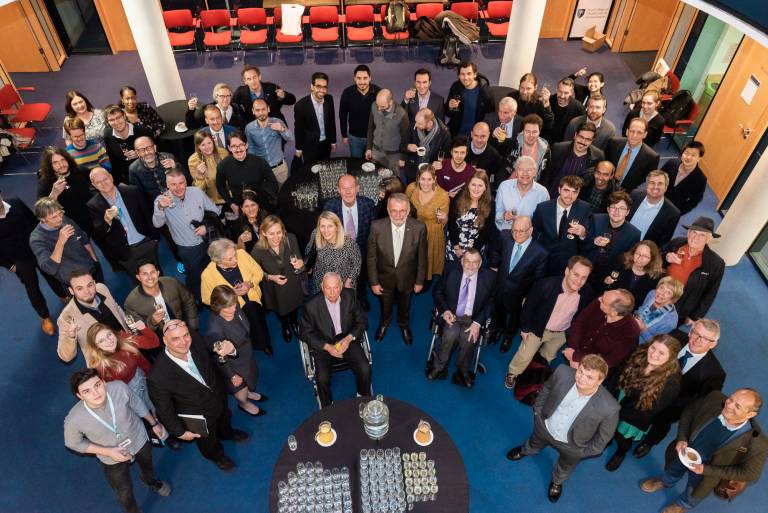 It is six months since Peter Kirstein, founder of the Department of Computer Science at UCL, Internet pioneer and mentor and friend to many of us, died.

He lived to see the year of the 40th anniversary of the department he founded but not to experience how the technology he helped develop has so transformed the world that, even in the midst of a pandemic, we have been able to continue to run universities, business and government the world over in a way that would be unthinkable without it.

We would like to mark what would have been Peter’s 87th birthday with a brief memory of him and a reminder of a promise we made him in the last few months of his life – to continue the Peter Kirstein lecture series we started on that memorable day last autumn when Peter was last with us.

In line with Peter’s wishes, this series will celebrate talent from across the breadth of computer science and will be a beacon of inclusivity but, given the current situation, will take place in spring 2021, in person if at all possible, and virtually if not.

Kirstein was born in Berlin in June 1933, soon after Hitler’s rise to power. His parents Walter and Eleanor, both dentists, had thought hard about whether it would be better for him to be born outside Germany as the political climate in the country took a rapid, sinister turn for the worse.

“My father was a member of a very prestigious yachting club, and the secretary said: ‘Surely you aren’t feeling comfortable in this club with people like Joachim von Ribbentrop and Hermann Goering as members?’” Kirstein said. “He didn’t understand. He had been in the army and was a very patriotic German. He got the Iron Cross. But then he understood – they regarded him as Jewish."

In 1937, the Kirstein family took advantage of the fact that Eleanor had been born in Britain to leave Germany for a new life in the UK. The process involved plenty of stress and upheaval, but Peter’s desire to ask questions kicked in right from the start.

“I have been told that, when we moved to London, my father was a little harassed, and suddenly his son disappeared,” he said. “I was found standing in front of a policeman with my thumb in my mouth. What happened was that my father had told me: ‘It’s alright you sucking your thumb in Germany, but in Britain there are big policemen and they’ll have scissors to cut off your thumb.’ I decided to take the experimental approach and asked the policeman, in German: ‘Where are your scissors to cut off my thumb?’ Perhaps that was fairly typical of what I did later.”

Wartime evacuation resulted in a fragmented education during Kirstein’s earliest days in Britain, but he was nevertheless quick to master English and, on returning permanently to London, attended Highgate School.

His higher education began with a scholarship to study mathematics at Caius College, Cambridge in late 1950. This was preceded by a six-month spell in California with an aunt and uncle, during which Kirstein enrolled on a fourth-year maths course at the University of California in Los Angeles (“They couldn’t believe an undergraduate could do a fourth-year course. I didn't find it easy, but I could do it,” he recalled). He also worked on calculations for US Army engineers.

After completing his Cambridge degree, Kirstein was offered a fellowship in electrical engineering at Stanford University in California, from which he received a PhD in 1957. A year earlier, his personal life was to change forever when he met Gwen Oldham on a transatlantic journey as he headed back to London for a break. “There was a girl who was busy flirting with the boys, and I decided that was just the sort of girl I’d keep away from,” he remembered. “But I didn’t – we got to know each other quite well.” The couple were married in 1958.

Kirstein’s career was beginning to take off, with his skills putting him in increasing demand. He joined CERN (the European Organisation for Nuclear Research) in Geneva, where he worked with a small accelerator research group, happily confessing later that his primary motivation for going to Switzerland had been the excellent skiing it offered. In 1963 he moved to General Electric in Zurich, where his focus on computers, and all that they could potentially do, intensified.

“I interested myself in time-sharing and networks and, in order to keep up to date, visited parts of the US in which they were doing interesting things in networks and computing,” he said. Those visits were to bring him into contact with the ARPANET (Advanced Research Projects Agency Network) – the early Internet – and he met the key pioneers in its development, including Larry Roberts, Vint Cerf and Bob Kahn.

In the late 1960s, Kirstein moved into academia with a switch to the Institute of Computer Science at the University of London, beginning a project to link the Institute’s computers to those of the Rutherford Appleton Laboratory in Oxfordshire. He got to know the work of Donald Davies of the National Physical Laboratory, whose aim was to build a digital network in Britain, and established a London ARPANET link with the help of research funding from him. In September 1973, he demonstrated this international connection to dramatic effect when he enabled delegates at a major UK computing conference – among them Roberts, Cerf and Kahn – to read their electronic mail back home in America.

A public demonstration of the early Internet followed at the Institution of Electrical Engineers in London in November 1973, and the pace of Kirstein’s work increased still further as he became involved in ARPA’s SATNET project, which involved Britain, Italy, Germany, Norway and the US. But in 1976, the low profile he had been careful to maintain disappeared when the Queen was asked to send an email to mark Britain and America’s collaboration on a new computer language for defence.

“The Royal Radar Establishment had a new building in Malvern. The Queen was going to open it, and they thought it would be an excellent idea if she used the ARPANET to initiate collaboration with ARPA on CORAL 66 [the defence language],” Kirstein remembered.
“The only message systems at the time were in California, and I asked my colleagues to set up an account HME2 – Her Majesty Elizabeth II – because to do anything else would be lese-majeste. We prepared the message and she sent it. Of course, it got wide publicity – and that was the end of the low profile I was keeping.”

His royal interlude aside, Kirstein had been busy with the London implementation of the Transmission Control Protocol/Internet Protocol (TCP/IP) system developed by Kahn and Cerf, standing firm in the face of disapproval from a British establishment that saw the ARPANET as experimental and preferred the idea of moving closer to European ideas of standardisation. “I was the only person working on these protocols, certainly in the UK and probably in Europe,” he said. “That is presumably why I became known as the father of the Internet in Europe.”

Kahn and Cerf’s protocols had conclusively shown their strength in November 1977, when Stanford students used TCP/IP to send data across three separate networks from California to Norway and back via the UK. The only blip happened when radio interference created an interruption as the data crossed the Bay Bridge in California. Once the interference had passed and the wireless connectivity was restored, the file being sent resumed without any loss.

As the 90s drew near, Kirstein became part of the Indian Educational Research Project, known as ERNET, and when the Berlin Wall fell in 1989 he joined a panel established by NATO to approve funding for network projects, with Armenia, Azerbaijan, Georgia, Kazakhstan and Uzbekistan among the beneficiaries. This project became known as the Virtual Silk Road project and connected nine countries to the Internet for use by universities on international collaboration.

Further pioneering work followed as he helped to develop secure Internet conferencing after being shocked by an apparent disregard for patient confidentiality during demonstrations of a link between three hospitals at which prostate surgery was being carried out.

Kirstein continued his involvement with UCL and its projects after taking early retirement in the early 1990s, only ending his tenure as head of its Department of Computer Science in the middle of that decade. But he never stopped thinking about the future of the Internet, predicting that it “won’t be allowed to continue this way” amid growing concerns over “social media and its relation to terrorism, self-harm, pornography…”

Developments such as the combination of the Internet and Artificial Intelligence, he warned, “have huge potential for good and, equally, huge potential for bad. We have a very serious problem in that it is impossible for the law to keep up with the speed at which one can do things with technology. I have not the faintest idea how one solves the problem that bad people can do the wrong things long before the law is changed. Luckily, I am too old to have to solve this”.

Looking back over his remarkable life and career, Kirstein felt his major advantages had been his internationally-minded outlook, willingness to take on bureaucracy and ability to collaborate with a wide range of people and organisations. He cited the example of Cerf (who called him “the Internet’s great champion in Europe”) and Kahn as a demonstration of the way in which collaboration, loyalty and trust could result in “world-shattering” progress. “The capabilities we have for finding out what’s going on and staying in contact are incredible – but you’ve got to be used to wanting to do it, and too often people don’t even try very hard to do it,” he said when asked what advice he would give those following in his footsteps. “But if you want to have impact, that’s something you must make sure of.”

UCL Computer Science is planning to host the next event in the Peter Kirstein Lecture Series in spring 2021.