The winners of a global challenge led by UCL to predict the evolution of Alzheimer’s disease (AD) have been announced today. 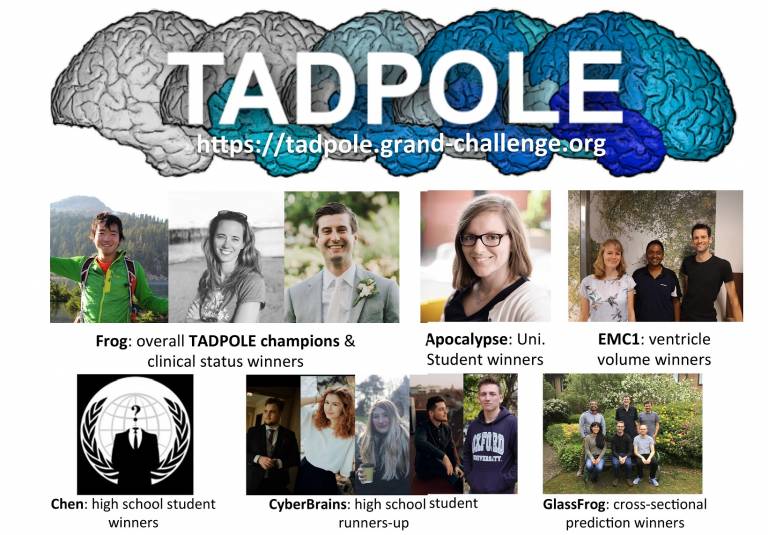 The Alzheimer’s Disease Prediction of Longitudinal Evolution (TADPOLE) Challenge has been running for the last 23 months, with participants from across the globe.

TADPOLE is a collaboration between the EuroPOND consortium, led by UCL, and the Alzheimer’s Disease Neuroimaging Initiative (ADNI).

Professor Daniel Alexander (UCL Computer Science), project lead of TADPOLE, said: “This has been a unique and inspiring challenge that has brought together a wide international community of computer scientists, statisticians, and clinical experts to advance the state of the art in a focussed challenge of predicting onset, development, and progression of AD. We hope the outcomes will make steps towards realising disease-modifying treatments in one of the biggest current healthcare challenges we face”.

Participants had to use data provided willingly by anonymous patients and use it to predict the progression of patients with AD. Specifically, they had to predict clinical status, whether any clinical exams defined the subject’s AD as expected or not, predict a score on a cognitive test and a measure of brain shrinkage from MRI.

The winning teams in various categories won a £5,000 prizes each, with some additional runner-up teams winning £2,500 each.

The award-winning teams’ details are below.

This project has received funding from the European Union's Horizon 2020 research and innovation programme under grant agreement No. 666992 (EuroPOND).