Across the world, there has been a recent increase in children who have hepatitis. Together with Great Ormond Street Hospital (GOSH) and UK Health Security Agency (UKHSA) our researchers investigated why more children than normal were being diagnosed with hepatitis. 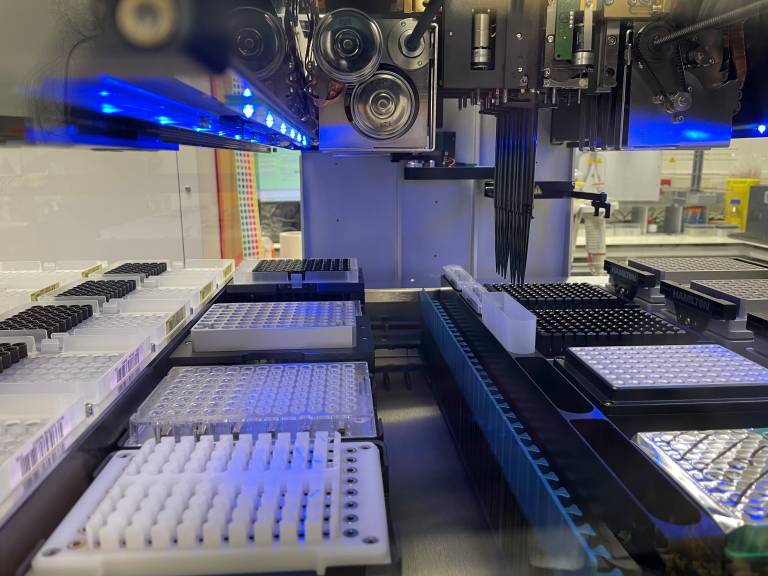 Recent acute hepatitis cases of unknown origin in children have now been linked to the virus AAV2 in two new UK studies, with no evidence of a direct link to SARS-CoV-2 infection.

Submitted to MedRxiv [1] as pre-prints, both studies found that the common virus AAV2 (adeno-associated virus 2) was present at high levels in all samples from patients with unexplained hepatitis. The virus, which is not known to normally cause disease and often accompanies infection with adenoviruses, has now been found by scientists to be associated with the development of acute hepatitis in a small number of young children.

The two studies were led independently and simultaneously. One, examining cases from Scotland by the MRC-University of Glasgow Centre for Virus Research (CVR) and the Royal Hospital for Children in Glasgow, in partnership with Public Health Scotland and ISARIC (International Severe Acute Respiratory and emerging Infections Consortium) WHO Clinical Characterisation Protocol UK (CCP-UK); and a second studying cases from across all four UK nations at Great Ormond Street Hospital and the UCL Great Ormond Street Institute of Child Health (UCL GOS ICH), in partnership with the UK Health Security Agency.

Since April 2022, a number of young children worldwide have developed jaundice and acute severe hepatitis of unknown origin. Currently the World Health Organisation (WHO) has reported at least 1010 probable cases in 35 countries. Children with the condition have commonly had to be hospitalised for a number of days, with 11 children in England and one in Scotland requiring a liver transplant. In the UK, the majority of the 268 cases have been under the age of five years old with nearly 40% of hospitalised cases (74 of 189) requiring admission to intensive care.

Previously, health officials had thought that a spike in adenovirus infections in spring 2022 – until now the most commonly-found virus in samples from the affected children – may be part of the explanation for this spike in hepatitis cases. These two new studies shed light on another virus that seems to play a significant role.

Researchers across two teams found that AAV2 (which cannot replicate without a ‘helper’ virus such as an adenovirus or herpesvirus) was present in 96% cases of unknown hepatitis examined across both studies.
Therefore, the researchers believe that coinfection with two viruses – AAV2 and an adenovirus, or less often the herpes virus HHV6 (which has also been found in sample from some patients) – may offer the best explanation for the onset of severe liver disease in affected children.

The Glasgow research and patient genetics [2]

The Scottish study carried out a detailed investigation of nine cases and 58 control subjects. Using next-generation sequencing and real-time PCR, the research team compared samples and were able to confirm the presence of AAV2 in the plasma and liver of all nine cases. There was no AAV2 in any of the subjects in the control groups, which were made up of age-matched healthy controls, children with adenovirus but normal liver function and children admitted to hospital with known causes of hepatitis. The Scottish study also examined the genetics of the patients with unknown hepatitis, alongside the pathogen genomics, to find out whether any of the children may be more susceptible to this type of acute hepatitis. Using detailed genomic testing of the patients, researchers were able to identify differences in the Human Leukocyte Antigen gene, that were not commonly found in the control groups of healthy children, or in the genes of children with other forms of hepatitis. The team believe these genetic sequences may offer another part of the answer as to why some children have become seriously unwell.

With expertise in metagenomics and adenovirus sequencing, the London team studied 28 cases, including liver samples from five children that required a transplant and blood samples from the remaining children who did not – residual samples were sufficient to test 17 cases for AAV2, 16 of which tested positive. RNA sequencing of liver samples confirmed the presence of AAV2 replication in the liver of children with unknown hepatitis. Patient samples were compared with 132 controls from immunocompromised and immunocompetent patients. The London study showed that AAV2 was present only very rarely in the children who did not have hepatitis (6 out of 100) and at much lower levels, even for immunocompromised children (11 out of 32).

Both studies were able to rule out the likelihood of recent or prior SARS-CoV-2 infection as a direct cause for the acute hepatitis. Researchers found no SARS-CoV-2 in the liver of patients, while tests conducted by the team in Glasgow to find out

whether the children had previously had COVID-19 found that only two thirds of the patients had antibodies to the infection, similar to SARS-CoV-2 antibody prevalence in Scottish children at the time. Further, the peak in cases occurred well after the peak in COVID-19 cases in Scotland but only shortly after a peak in adenovirus infections.

Researchers still cannot be certain why this is happening now, but both teams have highlighted the possibility that a peak in adenovirus infections in the general population after a period of lockdown may have contributed to this, through lowered immunity in children to certain viruses and changes in patterns of virus circulation.

Professor Emma Thomson, Clinical Professor and Consultant in Infectious Diseases at the MRC-University of Glasgow Centre for Virus Research (CVR) and senior author of the Scottish study said: “The presence of the AAV2 virus is associated with unexplained hepatitis in children. This virus can only infrequently in the presence of another virus (usually an adenovirus). AAV2 may cause disease itself or it may be a useful biomarker of recent adenovirus infection which may be the main underlying pathogen, but which can be harder to detect. There are many unanswered questions and larger studies are urgently needed to investigate the role of AAV2 in paediatric hepatitis cases. We also need to understand more about seasonal circulation of AAV2, a virus that is not routinely monitored – it may be that a peak of adenovirus infection has coincided with a peak in AAV2 exposure, leading to an unusual manifestation of hepatitis in susceptible young children.”

Professor Judy Breuer, Professor of Virology at UCL GOS ICH and Honorary Consultant Virologist at GOSH said: “While we still have some unanswered questions about exactly what led to this spike in acute hepatitis, we hope these results can reassure parents concerned about Covid-19 as neither teams have found any direct link with SARS-CoV-2 infection. Our data do, however, point to AAV2 in the liver and, or blood of cases as the strongest biomarker for the hepatitis.  Additionally, the presence of HHV6 and Adenovirus in the damaged livers, removed from the five children who needed liver transplants, raises questions as to the role of co-infections with these three viruses in the most severe cases”.

“We at GOSH/UCL were very happy to contribute our specialist expertise which has been built-up to support children at GOSH, to help in the investigation of this global emergency, affecting children in the UK at the moment.”

Dr Antonia Ho, Clinical Senior Lecturer and Consultant in Infectious Diseases at the MRC-University of Glasgow Centre for Virus Research, said: “It is critical to interpret our findings in relation to the timeframe of the patients’ clinical presentation. Most of the Scottish children had a preceding illness with diarrhoea, vomiting and abdominal pain (often associated with adenovirus infection) between 1 to 11 weeks prior to presenting to hospital with acute liver inflammation, which may explain why adenovirus has not been identified in all affected children. The temporal association between adenovirus/ HHV6 and AAV2 infections requires further study.”

Dr Sofia Morfopoulou, Sir Henry Wellcome fellow at UCL GOS ICH and a computational statistician, said: “The finding of AAV2 in 94% of the unexplained hepatitis patients but only rarely in the samples from the control populations, and at much lower viral titres, raises a lot of interesting questions. International collaborations to further investigate and elucidate the role of AAV2 and co-infecting viruses in paediatric unexplained hepatitis in patients from different countries are now needed.”

For more information on the Glasgow study: Elizabeth McMeekin or Ali Howard in the University of Glasgow Communications and Public Affairs Office on 0141 330 4831 or 0141 330 6557; or email Elizabeth.mcmeekin@glasgow.ac.uk or ali.howard@glasgow.ac.uk

For more information on the London study: media@gosh.nhs.uk or contact GOSH switchboard and ask for the press officer on call: 0207 405 9200

About University of Glasgow

Great Ormond Street Hospital is one of the world’s leading children’s hospitals with the broadest range of dedicated, children’s healthcare specialists under one roof in the UK. The hospital’s pioneering research and treatment gives hope to children from across the UK with the rarest, most complex and often life-threatening conditions. Our patients and families are central to everything we do – from the moment they come through the door and for as long as they need us.

The UCL Great Ormond Street Institute of Child Health (UCL GOS ICH) is part of the Faculty of Population Health Sciences within the School of Life and Medical Sciences at University College London. Together with its clinical partner Great Ormond Street Hospital for Children NHS Foundation Trust (GOSH), it forms the UK's only paediatric National Institute for Health Research Biomedical Research Centre and has the largest concentration of children's health research in Europe.