Understand Your Privilege and Use it for Good

At its core, privilege is a set of unearned benefits given to people who fit into a specific social group. Due to our race, class, gender, sexual orientation, language, geographical location, ability, religion, and more, all of us have greater or lesser access to resources and social power.

People who are marginalized in multiple ways experience amplified marginalization and drastically reduced privilege. This is due to intersectionality.

Take a moment to examine your own privilege, and using the list via the link below, quiz yourself by measuring how your privilege compares to your colleagues. As you review this list, keep a tally.

Actions: Use Your Privilege for Good

It’s up to people who hold positions of privilege to be active allies to those with less access, and take responsibility for making changes that will help others be successful.

The Sponsor vocally supports the work of colleagues from underrepresented groups in all contexts, but specifically in situations that will help increase their reputation and standing.

Example: “What I learned from Karen is the following ...”

The Champion acts similarly to a sponsor, but is more of an advocate for underrepresented colleagues, namely at public venues such as industry-wide events and conferences.

Example: Direct questions about specific topics to employees with subject-matter expertise instead of answering them yourself.

The Amplifier works to ensure that marginalized voices are both heard and respected. This type of allyship can take many forms, but is focused on representation within communication.

Example: “I agree with Helen’s recommendation for improving our net promoter score.”

The Advocate uses their power and influence to propel colleages from underrepresented groups into highly exclusive circles. The Advocate recognizes and addresses unjust omissions, holding their peers accountable regardless of status, gender, race and ethnicity, ability, age, body shape and size, religion, and sexual orientation.

Example: Offer to introduce colleagues from underrepresented groups to influential people in your network.

The Scholar seeks to learn as much as possible about the challenges and prejudices faced by colleagues from marginalized groups. It’s important to note that Scholars never force their own opinions, experiences, or ideas upon others, but instead simply listen and learn.

Example: Investigate and read publications, podcasts, or social media by and about underrepresented groups within your industry.

The Upstander is someone who sees wrongdoing and acts to combat it. This person condemns offensive comments or jokes, even if no one within earshot might be offended or hurt.

Example: Always speak up if you witness behaviour or speech that is degrading or offensive.

The Confidant creates a safe space for members of underrepresented groups to express their fears, frustrations, and needs.

Example: Believe others’ experiences. Don’t assume something couldn’t happen just because you haven’t personally experienced it.

This excerpt was adapted from Better Allies: Everyday Actions to Create Inclusive, Engaging Workplaces. Copyright Karen Catlin 2021. It has been republished here with permission. 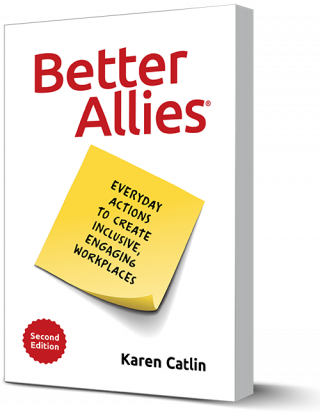