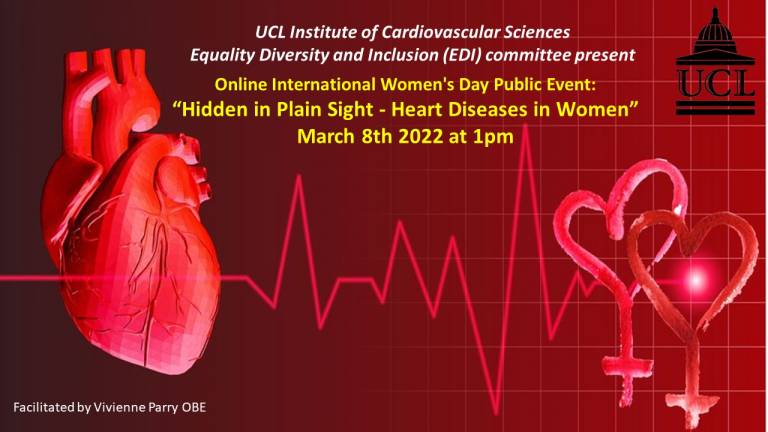 According to the British Heart Foundation, 3.5 million women in the UK are living with heart or vascular diseases such as heart attack or stroke and approximately 24,000 women per year in the UK will die of coronary artery diseases (an average of 65 women each day). Despite heart and circulatory diseases accounting for 35% of total deaths in women in 2019, there are still significant hurdles facing women with heart diseases including delayed diagnosis, late intervention and ineffective treatment, which have contributed to poor and largely avoidable outcomes.

Hosted by UCL's Institute of Cardiovascular Science, Vivienne Parry OBE will be facilitating a virtual panel discussion with experts in the Cardiovascular field to discuss these issues. 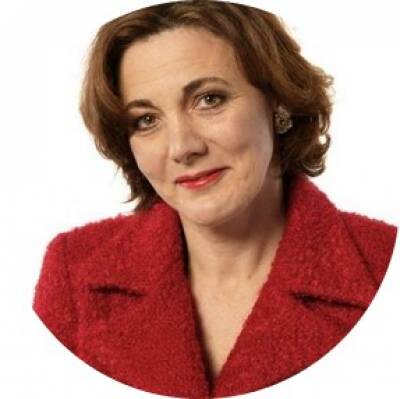 Vivienne Parry is a writer and broadcaster.  A scientist by training, Vivienne hosts medical programmes for BBC Radio 4, writes widely on health, presents films, facilitates many high level conferences and trains young researchers.  She has a part time role as Head of Engagement at Genomics England which delivered the 100,000 Genomes Project.  She has recently completed her terms as a board member of UK Research & Innovation which is responsible for the strategic spend of the UK’s £7 billion research budget. 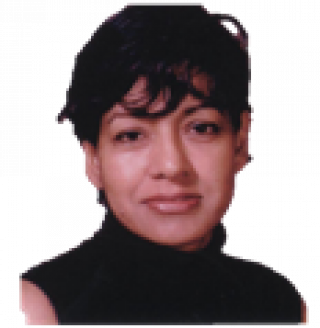 Prof Shanie Budhram-Mahadeo is Professor of Molecular and Cellular Biology, in the Institute of Cardiovascular Sciences (ICS) at UCL. Her research has been pivotal for providing insights into the factors that control important cellular processes in normal healthy tissues and for identifying the changes that contribute to common diseases including cancers, metabolic diseases e.g. type II diabetes and heart diseases. Other ongoing studies have identified a potential regulator that may contribute to differences in the responses of male and female hearts to stress and injury and may eventually provide greater insights into the basis for male-female differences in cardiovascular diseases.  As chair of the ICS EDI committee, Prof Mahadeo has been committed to the promotion and support of the principles of the Athena Swan charter. The programme of EDI activities and events led by Prof Mahadeo aims to support a healthy and productive environment for the mental and physical welfare of all staff and students. 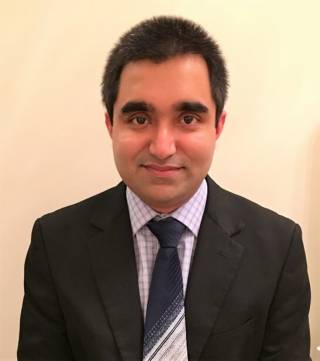 Dr Vikram Talaulikar is an Associate Specialist at the Reproductive Medicine Unit in University College London Hospitals NHS Foundation Trust and Hon. Associate Professor in Women’s Health at the University College London. He graduated in medicine in India in 2003 and completed postgraduate degree in Obstetrics and Gynaecology in 2007. He was awarded the MRCOG in 2008 and completed PhD degree at St. George's University of London in 2016. He is a certified ‘menopause specialist’ by the British Menopause Society. He has published widely in Reproductive Medicine. He is a member of the British Fertility Society, European Society of Human Reproduction and Embryology, British Menopause Society, and International Menopause Society. 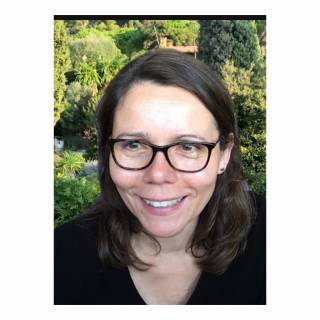 Professor Kirsten Harvey received her medical degree in 1997 and was awarded her MD PhD in 2000 from the University of Hamburg, Germany. She started her independent research career in 2005 and currently holds a position as Professor of Molecular Neuroscience and Cell Biology at UCL. She studies genetic forms of neurological diseases with a main focus on Parkinson’s and Alzheimer’s disease pathogenesis. As part of her research and teaching portfolio Prof Harvey has a keen interest in gender differences in disease susceptibility, prevention and treatment. 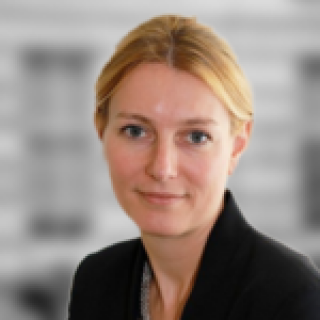 Dr Charlotte Manisty is Clinical Lead for Cardio-Oncology at Barts Heart Centre, and Associate Professor at University College London. She set up and leads the largest cardio-oncology service in the UK at Barts, and is currently Vice-Chair of the Society of Cardiovascular MRI Cardio-Oncology group. She is Research Lead for British Cardio-Oncology Society and chairs the UK Cardiac Device MRI working group.  She is regularly invited to speak around the world on both clinical cardiology and research, has received over £4 million funding for her medical research in the past 5 years, supervises several PhD students and is author of over 150 publications and books. 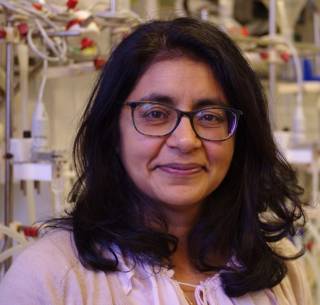 Amrita Ahluwalia is Professor of Vascular Pharmacology and Director of The Cardiovascular Clinical Trials Unit (CVCTU) at the William Harvey Research Institute (WHRI), Barts and the London School of Medicine and Dentistry at Queen Mary University of London. Professor Ahluwalia is highly distinguished for her ground-breaking and seminal discoveries that have defined and established the role of the non-canonical pathway for nitric oxide generation in physiology and therapeutics. She has been recognised for her research and contributions to science with several awards including notably the National WISE Award for Research. Prof Ahluwalia is one of the few minority women to reach leadership position as Institute Director within a UK Medical School (William Harvey Research Institute 2016-2020) and for being the first woman, and first individual of an ethnic minority background, to lead the top international journal for pharmacology in its 75-year history. 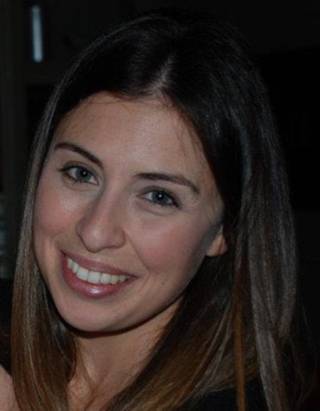 Dr. Gaby Captur (MD, MRCP, MSc, PhD) is a consultant cardiologist in inherited heart muscle conditions at the Royal Free London NHS Foundation Trust and senior clinical lecturer and Cardiometabolic Programme co-lead at the Medical Research Council (MRC) Unit for Lifelong Health and Ageing at University College London (UCL). Her research focuses on the use of cardiac MR to understand population health and rare inherited cardiomyopathies. From her background in MRI physics, she built the T1 and T2 cardiac MRI phantoms for quality assurance of parametric mapping and she developed the CMR-safe ECG imaging vest for earlier detection of disease and better prevention of sudden cardiac death.

She is a serving board member for the British Society of Cardiovascular Magnetic Resonance and for the Equality, Diversity and Inclusion Committee at UCL.