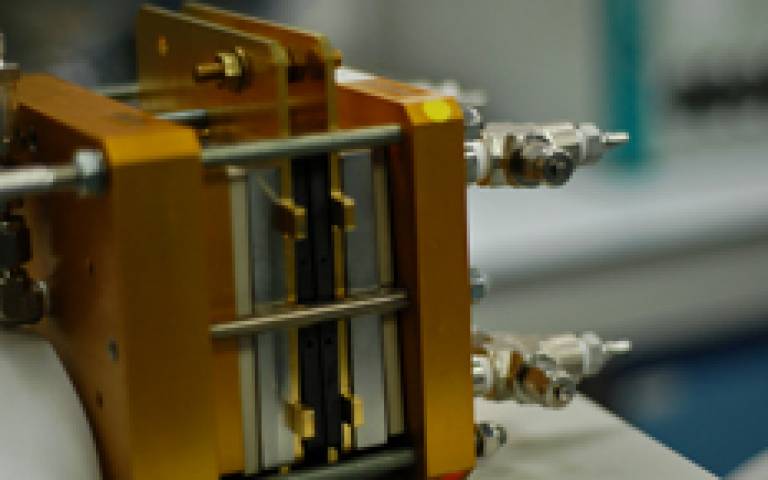 The Electrochemical Innovation Lab (EIL), established in 2010 as a collaboration between the Centre for CO2 Technology, UCLB and external partners will be officially launched on 16 June 2011.

The EIL was set up in response to the realisation of the importance of electrochemical technology and the strength that UCL has in this area and has enjoyed a successful history of commercialising electrochemical related technologies.

Electrochemical technology is behind many energy generation and 'environmentally friendly' processes that can reduce CO2 emissions and improve our standards of living. These systems are central to some of the most promising technologies for applications such as distributed energy, combined heat and power (CHP), micro-generation, load balancing for power grids, low carbon manufacturing processes and solar power. In the automotive sector, the technologies responsible for electric vehicles are predominantly electrochemical (batteries and supercapacitors), and if it transpires that a hydrogen economy presents the most sustainable solution for our energy future, then, again, electrochemical systems will be at the heart of it through the use of fuel cells and electrolysers. Other areas in which electrochemical technology has a major impact include: clean synthesis, monitoring of process efficiency and pollutants, biosensors, removal of contaminants, recycling of waste, reprocessing nuclear material and water sterilisation.

UCL has traditionally been strong in electrochemistry, indeed UCL's own Jaroslav Heyrovsky won the Nobel Prize in 1959 for his work on electrochemical methods and there are currently over 20 academics and researchers involved in electrochemical science and technology or materials development for electrochemical systems. In response to the importance of this field and the particular strength that exists in UCL, the Electrochemical Innovation Lab (EIL) has been established. The EIL was the brainchild of Prof. Stef Simons and Dr. Dan Brett of UCL's Centre for CO2 Technology, along with industrial partners Dr. David Hodgson (CEO, Vallontia) and Nick Milligan (CEO, South West Electrolysers). They recognised the challenge of engaging industry in technological developments that were still at an early stage, whilst needing an industrial perspective to develop those technologies into robust, engineered products. Their radical solution was to devise a mechanism that engaged an industrial perspective at the early stage of development (Technology Readiness Level 1-3), in order to identify likely challenges at TRL 4-6. In this way, the EIL would perform world class scientific and engineering research and make an early identification of those opportunities with potential for commercialization. Once identified, those opportunities would be fast-tracked using the commercial networks now an integral part of the EIL. In adopting this approach, the 'traditional' model of reaching the end of an EPSRC project and then asking whether there is anything commercial resulting is replaced by a model that uses industrial expertise to ask those questions early on, with a view to accelerating the downstream commercialisation.

Tim Fishlock of UCLB has played a key role in establishing the EIL and creating the right environment to connect with industry. The recent 'spin in' of CMR Fuel Cells to the EIL is evidence of the flexible and innovative approach that UCLB is taking. Research students have also been specifically attracted by the entrepreneurial spirit the EIL engenders.

More information about the EIL concept and the research is available through the Centre for CO2 Technology website.