VideoGUD is a collaboration between art and film units in the counties of Gävleborg, Uppsala and Dalarna in Sweden.  The network aims to make current video art accessible to all, by commissioning video projects for display on its video stations located at libraries, schools, health care facilities, museums and cultural centers throughout the country.

For this exhibition, Kreider + O’Leary exhibit a 9 minute video work entitled ‘LA Tapped’, recorded in Los Angeles in 2010 and edited for this exhibition in 2015.  ‘LA Tapped’ is a spatial enactment of the Westin Bonaventure Hotel in downtown LA. Here Kreider + O’Leary perform the building as per philosopher Frederic Jameson’s reading of it – as a model of postmodern architecture and an allegory for the logic of late capitalism. The video documents a recurring tap dance routine, performed at various locations throughout the Bonaventure including elevators, walkways, conference spaces, service areas, shops, elevated running track and outdoor pool. The tapping sound solicits a response from the architecture, providing a nuanced reading of the materiality of the various spaces encountered. As the performance proceeds, the sound recorded in the Bonaventure is fused with sound sampled from John Pilger’s film ‘The War We Did Not See’ exposing the enmeshment of representations of our built environment with the logic of late capital, and the systematic violence that this logic upholds and reinforces.

This exhibition is funded by the Swedish Arts Council 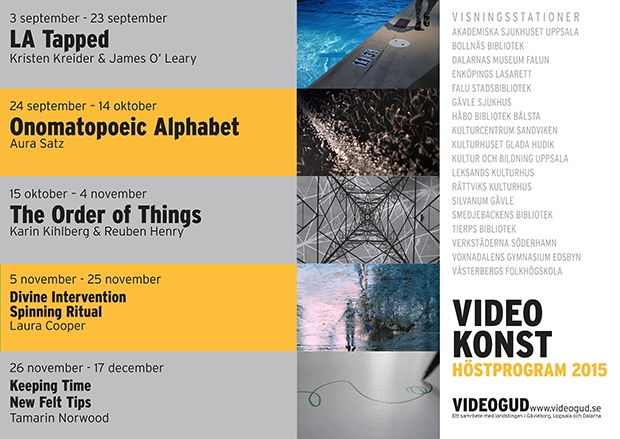