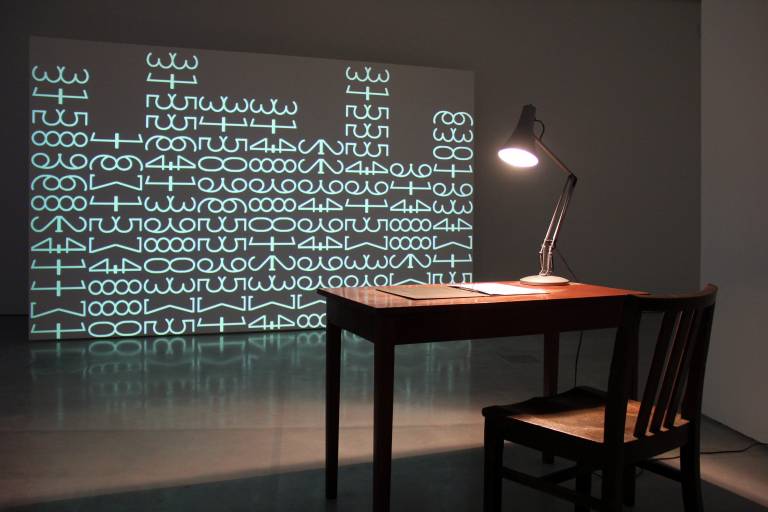 Jon Thomson’s inaugural lecture reflected on the use of text, both visually and as a textual basis, in his art practice. Thomson introduced the lecture with a demonstration of an early work from 1998 - Trigger Happy, an appropriation of the video game Space Invaders, Thomson played the game live in the lecture theatre, but instead of shooting at aliens, firing at a pixelated on-screen reproduction of the essay What is An Author? by Michel Foucault. In destroying this examination of the nature of authorship Thomson explained how he was fascinated by the tension of an active user and the passive viewer, that there is this conflict of interests - as the user you want to shoot the text and as a viewer you want to read the text as it is broken down.

Who are Thomson & Craighead?

Alison Craighead joined Jon Thomson during the lecture to jointly present their ongoing collaboration. They have been working together since 1993 producing a wide range of artworks and projects. Together they make artworks that examine the changing social and textual structures in the internet age and looking at how the digital and physical world have become increasingly entangled.

What Can Documentary Be?

In their lecture Thomson & Craighead showed us how documentary art can be made through imaginative ways of implementing human input and data and how they often use live feeds and transcripts from internet based sources to make artworks and gallery installations. Their ongoing project Beacon is an example of this constant flow of information, using live data and repurposing it in different ways. For example, using split-flap display train signs to automatically display searches as they are being made in online search engines. For Thomson, this work is a silent witness showing an image of ourselves to ourselves, in real time. He described how these search engine entries had now formed a database built over 10 years. With over a million searches it now offers a snapshot of this period in the time and what we were looking for in the relatively early days of the internet.

Is appropriation and manipulation a part of documentary art?

Thomson highlighted how appropriating and manipulating data and human input directly is something they have developed in their work. In Aberdeen Wall (2010 – 18) they created an electronic cordon in a 2 mile radius around the gallery through which the artists would intercept online status updates and tweets and materialise them as printed posters. Presenting them in a grid in columns chronologically they offered a snapshot of invisible information. Visitors would find their own writing on the wall, offering a collision of the digital and physical world. Similarly, in their work More Songs of Innocence and Experience (2012) they used karaoke as a form of illuminated text – a humorous application of spam emails as karaoke videos, Thomson explained how they were interested in the role of manipulation and argues that the unsolicited spam email is an under-recognised form of craft – often following contemporary events and based in a truth of some sort, an attempt to extort and distort and a glimpse of something that originates outside of the mainstream. Through karaoke Thomson and Craighead allow it to be re-seen, performed and owner by the reader.

How can cultural objects hold the story about our legacy?

Thomson explained how they had been exploring the subject of nuclear waste and applying their own text-based process to create cultural objects which measure and express its presence. In 2016 they created Temporary Index a public sculpture measuring the numbers of years of radiation decay in sites holding nuclear waste. This work invites the viewer to reflect on a measurement well beyond the human timescale. Similarly, in their recent work Here Not Here, 2018, at the UCL student centre, they have applied another system of measuring through a text work; a live feed of all students registering at UCL offering a constant backdrop of activity to the building and a geological scale of the human presence at the university.

Concluding his lecture, Thomson summarised that their work had become rooted in the visual use of texts and words and that this remains a vital theme. He suggested manipulating these texts and designations can help us to understand how data can be used to reveal more about our society, for example the work at UCL highlights those who are and aren’t represented and reflects the wider global conditions in a changing world.

Responding to the lecture, writer and artist Dr. Kristen Kreider drew our attention to the significance in the technological shifts and advancements in Thomson’s practice, in particular the internet, in gathering data and making connections. For her Thomson & Craighead has blossomed in an era in incomparable technological advancement by engaging with words as their material.

Our thanks to Jon Thomson and also Alison Craighead for offering a comprehensive, entertaining and engaging overview of their collaborative practice and leaving us with a greater understanding of the role of text and textuality, particularly in the context of documentary art, and also an insight into their unique and remarkable collaborative methodology.