Student blog - Inaugural Lecture | The Future in Retrospect: Land Art to the Moon and back 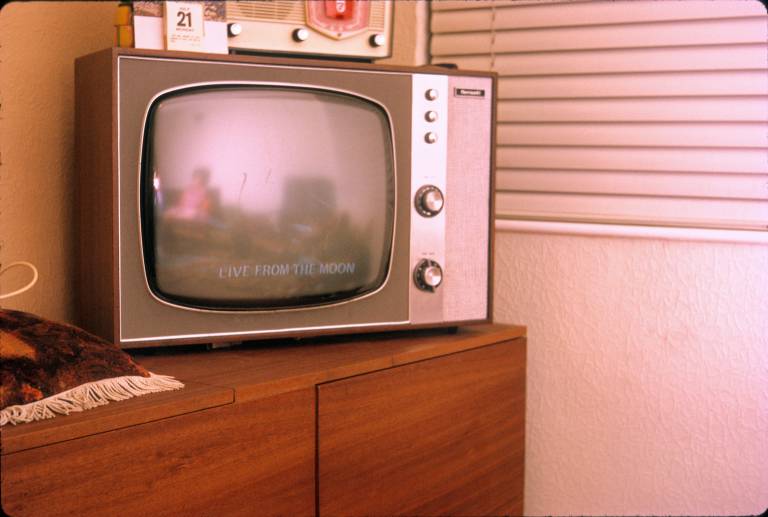 On a wet and windy evening on in November I made my way UCL's Gustave Tuck Lecture Theatre to join Joy Sleeman for her inaugural lecture The Future in Retrospect: Land Art to the Moon and back.

The lecture hall was filled with members of the public, students, associates, collaborators, friends and followers of Sleeman’s work. Inaugural Lectures are when the scholarly community join together to celebrate outstanding research of a professor appointed from outside UCL or promoted internally. It is an exciting programme of intellectual rigour from the arts, humanities, social and historical sciences in UCL. They are an indicator of academic and scholarly achievement.

The Slade one is of nine departments in the UCL Faculty of Arts & Humanities, and Sleeman’s lecture is one of three Inaugural Lectures by Professors from The Slade in 2019. Sleeman studied History of Art at UCL from 1987-1990 and received her PhD from the University of Leeds Department of Fine Art in 1995. Since 1995 Sleeman has taught Art History and Theory at UCL's Slade School of Fine Art and is now the Faculty Graduate Tutor since 2014.

Sleeman opened up the lecture by noting that the inaugural lecture was a strange scenario for her as this same hall was where she attended her first art lecture as a student and was also the site where she gave her first art lecture in 1995. It seemed extremely fitting that she would give an insight into the development of her research in the same hall as it all began.

Sleeman began the lecture with two slides from 1969; the year associated with the first manned landing on the Moon by the Apollo 11. The slides were taken by her father, who was seated in the audience. These slides were two unique images taken on the night of the Apollo Moon Landing; they were taken in a living room area with a television screen facing the camera. On the television screen you could read the captioning of the moon landing, Neil Armstrong walking on surface of the moon alongside the reflection of Sleeman’s mother, also seated in the audience. One image was taken in black and white and the other image in colour. These two images encapsulate the impact the moon landing had on the public in 1969, a moment in history when time stood still.

It is from here that Sleeman’s lecture maps out various artists’ practices from the year 1969 and specifically those working in Land Art. Land art in a very simplified form could be described as an art movement that emerged in the late 1960’s “that is made directly in the landscape, sculpting the land itself into earthworks or making structures in the landscape using natural materials" (1).

Sleeman’s own practice concerns the histories of land art and in particular the history of Land Art in Britain. Sleeman is acknowledged as an expert in the field.

The majority of Sleeman’s research practice is spent alongside practising artists. She writes, curates and lectures on aspects of land art and sculpture for a broad constituency that includes the public audiences of art galleries, museums and other arts organisations, as well as academic contexts (2).

Sleeman’s research has also led to her working collaboratively on Land Art, for example the exhibition Uncommon Ground: Land Art in Britain 1966-1979. It was co-curated by Joy Sleeman, Nicholas Alfrey, Ben Tufnell, The Arts Council, and Hayward Touring and toured the UK in 2013 and 2014 and was an output of an intense period of research. Three land artists that were included in this exhibition were discussed by Sleeman in more depth in this lecture; Nancy Holt, David Lamelas and Roelof Louw.
One artist Sleeman focused on in the lecture was American artist Nancy Holt. More specifically Sleeman discusses the work Trailmarkers created by Holt in Dartmoor Wales in 1969. Trailmarkers was a series of slides that were made into an artwork 40 years after they were first shot. The images from the slides depict dots painted on rocks and walls that mark out a footpath or trail in Dartmoor National Park, Wales. Holt was there on a trip with partner and fellow artist Robert Smithson. They had come to England and Wales to work collaboratively on work together. In Trailmarkers the sites for the slides were sourced by Holt and were then framed and shot by her. The artwork was 40 years in the making as the images from the 1969 slides were not printed until 2012.

In 1969 the moon’s landscape was changed for us after as it was seen as a landscape for the first time through human eyes. Sleeman’s research is interested in images and artwork where the image of the moon has disappeared rather than being fully visible. Her research is interested in examples of art that depicted the moon landing rather than represented. Trailmarkers is a good example of this; it is a work that captured a way of seeing rather than a path. It captures Holts footprints left behind and the remnants of their human presence.

Sleeman’s lecture then continued to elaborate on this theme of journeying and footsteps through artists such as Katy Pattison, Roelof Louw and David Lamelas. She highlighted their ability to both capture our immediate environments as if they were the surface of the moon.

Sleeman then concluded the lecture with an anecdote about her conversation with Nancy Holt in 2013 in which she spoke of her experience capturing Trailmarkers. Holt spoke of how she perfectly framed each dot within each image. Back then you only had so many slides as opposed to now where you can capture lots. She spoke of framing them each as a landscape, so studied they were almost paintings.

This lecture highlighted the work of artists working in both 1969 and today that are literally, figuratively and materially working through journeying, paths, and our human presence within landscapes. It was a lecture highlighting our intense experience of place.

When the lecture concluded and I left the lecture hall to return to the outside world, I couldn’t help but recognise traces of different pathways and journeys across the UCL Main Quad under the night sky. Small, tactile, sculptural experiences Sleeman had highlighted in her lecture.