Dr Katherine Saunders-Hastings is Lecturer in Latin American Studies at UCL’s Institute of the Americas, where she teaches and researches on urban and political anthropology. Prior to joining the Institute in 2016, Katherine was a Postdoctoral Fellow at Stanford University’s Centre on Democracy, Development, and the Rule of Law. She earned her doctorate in Socio-Legal Studies from the University of Oxford in 2015. She holds a B.A. in Anthropology and History from McGill University, an MPhil in Latin American Studies from the University of Cambridge, and has worked with the International Centre for the Prevention of Crime (Montréal, Canada) and the Asociación para el Avance de las Ciencias Sociales (Guatemala City, Guatemala). Her research has been supported by fellowships from the Social Sciences and Humanities Research Council of Canada, the Clarendon Fund, and the Harry Frank Guggenheim Foundation.

Katherine’s research interests encompass issues of violence, (in)security, illicit economies, citizenship, and governance in Latin American cities. As an anthropologist, she employs ethnographic methods based in long-term fieldwork to understand urban violence and criminal economies in poor and marginalized neighbourhoods. Her recent work has focused particularly on the effects of changing patterns of gang violence in Central America on local life and governance practices. Katherine’s current book project examines the dynamic relationships between criminal groups, community residents, and the state in Guatemala City’s gang-dominated barrios. Katherine is part of the international research team for the ESRC-funded research project Anthropologies of Extortion, for which she will be conducting comparative ethnographic research on the structure of criminal economies and modes of gang governance in Guatemala and Honduras.

AMER0080 Power and Politics in Everyday Life: Topics in the Anthropology of Latin America

AMER0005 Researching the Americas: Latin America and the Caribbean

Dr Saunders-Hastings welcomes inquiries and applications from prospective students with research interests related to crime, violence, gangs, drugs, insecurity, and non-state armed actors in Latin America, as well as to the study of urban or political anthropology more generally.

2015. Today and Tomorrow Gangs: Youth and violence at the Margins of the Global City. CITY: Analysis of Urban Trends, Culture, Theory, Policy, Action 19: 392-395

2010. Press Narratives of Youth Violence: Patterns and Practices of Representation in El Salvador and Guatemala (NGO Report). Montreal: International Centre for the Prevention of Crime. 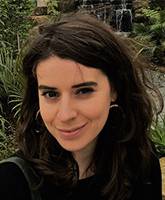