On Tuesday 3 March, past and present members of Student Media UCL met to network, share stories and take part in a Q&A with industry leaders Harry Bradbeer and Chantal Rickards. 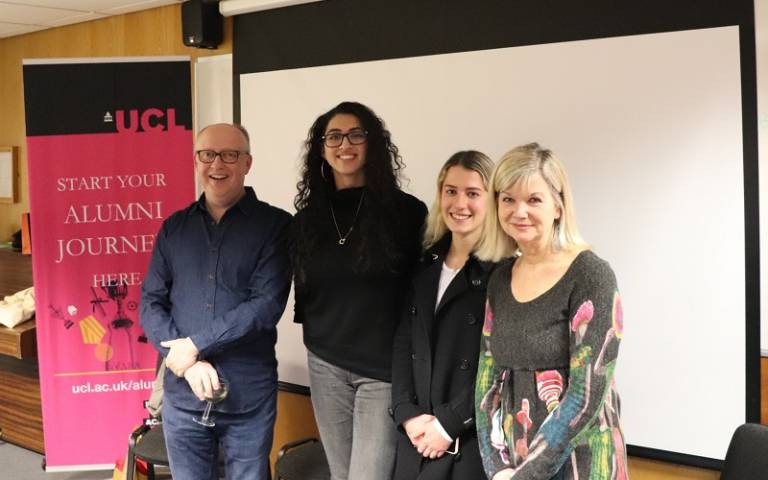 Prior to social distancing measures in the UK, more than 65 students and alumni came together on campus to celebrate the impact of student media at UCL and its award-winning outlets that include Pi Media, Rare FM, UCL Film & TV Society, the Cheese Grater, SAVAGE Journal, and Kinesis Magazine.

During the talk, the two UCL graduates shared some invaluable advice for alumni and students, as well as wonderful memories of their time at UCL, including what brought them to study at the university and pursue their subsequent careers.

Imposter syndrome can affect anyone

Throughout the discussion Chantal, whose work on big titles including Countdown, Masterchef and This Morning propelled her international career, disclosed her experiences with tackling imposter syndrome: “I got away with it by not pretending I was brilliant, I asked people to advise me on things, said Chantal.

"Always own up if you don't know, and always ask questions. I still do it now: there are still things I don’t understand.”

Experiences with this sense of worth were also shared by Harry who revealed, “When I just made a film and I went to the studio's enormous sound stage, I felt like I didn't deserve to be there. I felt the same when I went to Pinewood Studios.” Harry’s career within the film and television industry propelled when he became lead director on The Cops which won the BAFTA for Best Series two years in a row.

Harry went on to remind the audience that whenever you move outside your comfort zone, you have to go with your gut. He explained that: “When I’ve gone with my gut, it's been amazing. Along came Fleabag and my agent said ‘Why would you do a comedy? You've never done a comedy!’ But I met Phoebe and we fell for each other creatively.”

Based on her one-woman stage show, Fleabag is a British comedy-drama television series that follows the journey of a dry-witted woman as she navigates life and love in London, created and written by Phoebe Waller-Bridge. With Harry’s expert direction the show has become a multi-award winning sensation, winning six Primetime Emmy Awards, including one for him as Director.

The importance and impact of building networks was also touched on during the talk – a process that started for both Chantal and Harry at UCL in the 1980s.

During his History studies, Harry described UCL as having a “sense of opportunity and not being snobbish, of being able to accept anyone for what they have. Everyone has a skill and something to offer.” This is where he learnt key skills on collaboration and working with friends, something he states is “crucial in media.”

Chantal, who moved to California in 2015 to take up the role of CEO of The British Academy of Film and TV Arts (BAFTA) Los Angeles, agreed that networks are incredibly important.

“I still use networks that I built at UCL.” She advised the audience to “build networks around you. They will stand you in incredibly good stead.”

In her role at BAFTA, a post she held until October 2019, she executive produced and had ultimate responsibility for the Britannia Awards which has international distribution.

“Be the best version of yourself” – Harry Bradbeer

Finally the audience heard one last piece of advice from Harry who suggested that authenticity is key, “being yourself is a crucial thing. If you're going to be a leader, producer or head a department, be honest about being yourself.”

Guests stayed well into the evening; it was a unique and inspirational opportunity for generations of past and present members of Student Media UCL to come together, learn and be motivated.

A fantastic way to virtually connect and build your own network with others in the global UCL Community, is by joining our exclusive online platform for all students and alumni, the Alumni Online Community.