The image, from Hertfordshire Genealogy, is of the house c. 1904.

Subsequently owned by various private individuals, used as a school 1944-c.1972, and purchased by V. Lownes (Playboy magazine) in the 1970s. Later private owners to the present.

Published by Newman, Berkhamsted circa 1904 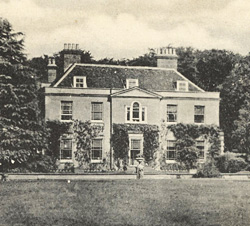