UCL Laws alumnus (LLB 1994) Amandra Clift-Matthews and her husband have sponsored a UCL Laws student since 2017. Amanda shares why she decided to fund a scholarship and the value it can bring. 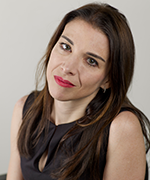 I joined UCL in 1991 as a Law undergraduate. Thereafter, I can only describe what happened to me as utterly transformative. Academically, socially, personally. Not just because I met my now husband during that time, but because it opened up a whole world that would never have otherwise been available to me.

I grew up in a rural area with limited possibility. Neither of my parents went to university. Neither of them did A levels. My mother didn’t even finish school. My elder sister left school at 16 to start work in a local shop. That was the norm in both my parent’s families.  Those were the expectations. As for me, at 16/17/18 I remember feeling utterly stifled, and under stimulated. Instinctively, I knew there was a big world of possibility out there but no idea what that might look like, or how to access it.

University was my answer. But I was lucky. I was fortunate to go to university at a time when course fees were paid for everyone and student loans were only just being phased in. There was still a grant, at least a meagre one, paid out for living costs.  So it meant that, together with a series of unskilled part-time jobs, I managed to get by.

Without this help the financial burden of going to university would have been unthinkable. I would not have been able to contemplate debt of the size faced by current undergraduate students, and I know my parents would have never permitted it. I would have had no choice but, like my sister before me, to give up education, and start earning my keep.

The thought that, had I be born later, I might never have gone to university horrifies me.

Instead, I went to the Bar and here I am.

Today, continuing their education for as long as they wish is something that my own children will take for granted. But frankly, as much as I love and want the best for my children, as we all do, I cannot escape the nagging feeling that their privilege is someone else’s unfairness.

So, when my husband and I became in a position to help someone else transform his or her future, in the way I had been able to, we wanted to do it.  My husband studied Maths at UCL, but we chose to fund a law student from a disadvantaged background because we both felt it to be a degree that can truly reshape the course of person’s life.

Since 2017, we have sponsored Ellie*, who is now in her third year at UCL. Receiving her updates is a delight. And though I will be happy if Ellie decides she wants to become a corporate lawyer in the city, I am more than proud that she has already volunteered her newly learned skills to assist sufferers of human trafficking, and in other socially responsible ways.

As a member of a profession that struggles to be representative of our broad, pluralised society, especially at the higher end, I am a strong believer that not only is encouraging equality of opportunity morally right, but that diversity reinforces legitimacy and it champions merit. I am of a generation that has seen, sadly, the less capable go forward due to pure accident of birth, where the positively brilliant have been left behind. With more Ellies studying law, I hope to see that change.

If you are thinking about a charitable endeavor, then I cannot think of a better way to make both an immediate and long-term difference. My husband and I are relatively new to philanthropy, but we have funded a number of small projects now, not knowing whether what we have given money to will ever go further or actually make a difference. However, facilitating a student’s university study must be the most gratifying of them all.

To put it in the financial terms, it is low ‘risk’. Any student who makes it through the selection process to study a subject at UCL as competitive as law is guaranteed to be intelligent, motivated and to work hard. That also means completion of the degree, or return on your investment as it were, is more or less certain. And best of all, the results are right in front of you.  So, besides being a nice thing to do, this is money well spent.

And it is a small way to pass on the gift of higher education that I, and probably many of us in this room, were given as a matter of course at the same age.

As a human rights lawyer, one has to learn very early on that, as an individual, you cannot change the world and help everybody. But what you can do - we each can do - is change one person’s life at a time.

*The student’s name has been changed to protect their privacy 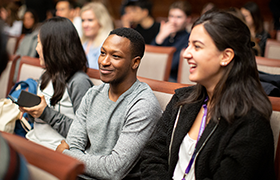 If you would like to know more about how to support scholarships at UCL, please contact the UCL Laws Communications team.

Alternatively, find out more about ways you can make a donation.

If you would like to know more about how to support scholarships at UCL, please contact the UCL Laws Communications team. Alternatively, find out more about ways you can make a donation.

Our scholarship recipients share how funding has impacted their studies, student life in London, and their future career plans.