IOE researchers examined why some students continue to study maths and physics once these subjects are optional, whereas other students do not.

These subjects lead to good careers, but even many talented students aren’t interested. How can we get more young people to embrace physics and maths?

Britain needs scientists and engineers in order to compete on the economic world stage and to have a vibrant scientific life at home. Yet there are not enough young people studying mathematics and physics to advanced levels to meet industry’s needs or to teach the next generation.

Most qualified students drop these subjects when they become optional at 16. In 2010, physics entries only constituted 3.6% of the entire cohort sitting A levels. If parents and teachers are to encourage more young people to study physics and maths to an advanced level, we need to ask a key question: what motivates those students who do study these subjects at A-level and at university to do so?

IOE researchers from the Understanding Participation rates in post-16 Mathematics And Physics (UPMAP) project conducted a three-year project to find out.

They discovered that young people are more likely to continue maths and physics post-16:

For example, university physics student Benjamin told the researchers: “My Grampa, he helped a lot because when I went to visit him in Spain we went for a walk and he was telling me about the stars and about the earth rotating and it’s all these new things, it was like, wow.”

And Gita, another interviewee, said: “I went to my careers advisor and I read a lot on the internet and it said that physics, it opens a lot of… opportunities and stuff.”

The project also found that schools where attainment in physics was high at 16 were likely to have more students continuing the subject at A-Level.

“From a policy point of view, given that governments have little control in the short term over how parents view subjects, we stress the value of deep conceptual understanding mediated by long-term relationships with excellent teachers,” say the researchers.

They also urge policy-makers and schools to tell young people more about the potential of physics and maths to broaden their horizons and lead to exciting and lucrative careers.

Although boys and girls study physics and maths for the same reasons, girls are less likely to continue these subjects post 16. In 2010, only 1.4% of girls sitting A levels took physics, compared with 6.2% of boys. This is despite the fact that girls do as well in the subject at 16 as boys do.

UPMAP discovered that, given the importance of being encouraged by a teacher to study maths and physics, girls were less likely to receive this encouragement. They also had less positive experiences of their physics lessons than boys did.

The researchers looked at the differences between boys’ and girls’ answers to questions about studying physics. Boys were more likely to identify with every positive statement. The greatest difference between boys’ and girls’ answers was to the statement “My teacher thinks that I should continue with physics post-16”. More boys also believed their teacher was good at explaining physics, had high expectations of students and was interested in them as a person.

Boys displayed more confidence about their own ability in the subject than girls did. The greatest difference between boys’ and girls’ answers to questions about their own experience with the subject was to the question, “how do you feel you compare with the others in your group?” Boys were significantly more likely to rate themselves highly. 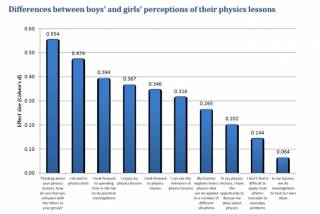 University physics student Eleanor, interviewed for the study, is typical in that she was encouraged by a parent and a teacher: “I always found [physics] fascinating from an early stage, space and particle physics and I read books about it for a long time because my dad was interested in it so there was books around the house and that helped me to develop my interest… “ She also had a very good teacher at GCSE: “She was very good at making it interesting, she made the lessons fun and I suppose I got on with her on a personal level… and she was very encouraging…”

But her A level teacher “didn’t know my name for maybe nine months and he didn’t pay any attention…”  And, worryingly, at the end of her degree course, Eleanor told the interviewer that she couldn’t see continuing with physics any further. This, say the researchers, “is an important issue with respect to the education of future scientists”.