Every 18 year-old should be offered £10,000 to spend on courses of their choice, paper says

Every young person in England should be offered state funding of £10,000 to spend on a university, college or training course of their choice after they turn 18. 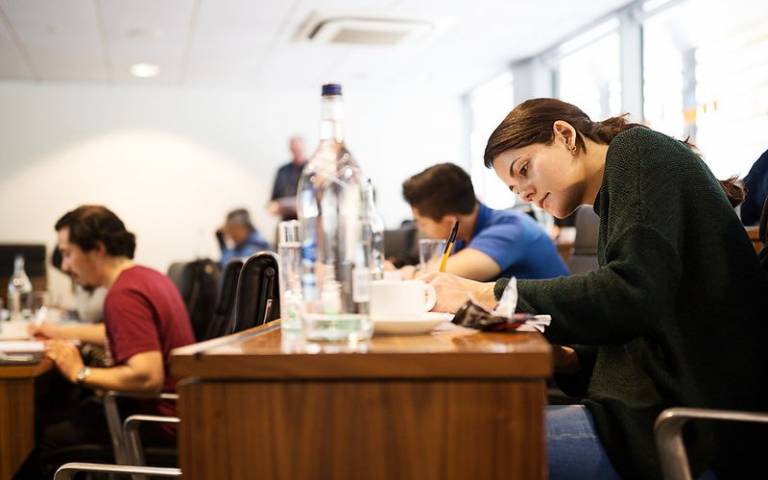 Adults who missed out on university in the past should also be eligible, an innovative paper being launched tomorrow (13 February) will say.

The idea is set out in a new paper published by the Centre for Learning and Life Chances in Knowledge Economies and Societies (LLAKES), based at UCL Institute of Education (IOE).

Written by Tom Schuller, Alan Tuckett and Tom Wilson, it suggests university undergraduates could use the entitlement of up to £5,000 a year over two years to cut the cost of their tuition fees, while young adults who did not want to go to university would be able to cover the cost of courses in further education, apprenticeships or other accredited routes.

Any adult without a degree would also be eligible, which would help to re-invigorate adult education and a culture of lifelong learning for all, the paper's authors argue. They also believe it would be more equitable, and more cost-effective, than Labour's proposal of scrapping university tuition fees, since those not going to university would also benefit.

The idea of funding young people to study in this way, through a "National Learning Entitlement", opens another front in the debate about the future of university tuition fees in England.

The cost of tuition to students would effectively be cut, though not abolished, through the suggested new system, with those on a three-year course, for example, not having to fund the first £5,000 of each of their first two years, but then paying for the third year. As now, remaining costs to the individual would be funded through a system of government loans.

But far more people would benefit from this move than from Labour's proposed scrapping of tuition fees, it is argued, with the half of young people who do not go to university being able to draw on the £10,000 entitlement as well as those taking degrees.

The authors say every young person would become eligible for the National Learning Entitlement on their 18th birthday, and given access to funds to spend on accredited courses, up to a maximum of £5,000 per year over two years.

The entitlement could be used flexibly, to finance part-time study, for example, if necessary spread over a lifetime. The authors hope the move would re-invigorate both adult and further education, with the paper pointing out that further education (FE) funding has shrunk by a quarter in five years, while the number of students over 19 in FE and skills has slumped by nearly half since 2005/6. Funding for adult skills and education has been cut every year for the past 10 years.

The proposal would stimulate a wider variety of courses, beyond the current lopsided concentration on three-year degree courses, the authors argue, as providers would be incentivised to offer more short-course and part-time options, which students could pay for using their entitlement, over many years if necessary.

The current Apprenticeship Levy, which larger employers have to pay into and which helps fund apprenticeships, should be broadened to cover other kids of adult training, says the paper, allowing employers to top up the £5,000 entitlement. The paper estimates the overall cost of the suggested new system at up to £8 billion, which the authors say is cheaper than the estimated £10 billion cost of Labour's proposal to scrap university tuition fees altogether.

"The anti-austerity case for more public support for (post-school) education is gaining ground," says the paper, "but £10 bn extra on university students alone is too high."

By comparison, it quotes a recent Institute for Fiscal Studies estimate that the current tuition fee system will cost the government £5.9bn a year, taking into account student loan repayments.

Crucially, the LLAKES paper argues, the proposal would spread the benefits of this investment in post-18 education beyond the fifty per cent who currently attend university.

"The proposal takes the debate beyond the current narrow focus on university education and student debt, to a broader and more inclusive system which would encourage learning at all ages by a diverse range of students, at a lower cost than the abolition of tuition fees," argues the paper.

"It brings into play the other 50% of the youth cohort [beyond those entering university], as well as adults who have missed out first time round. It strongly encourages diversity of provision and so matches supply better to demand. It wins on fairness, efficiency and future orientation."

It adds: "The social and economic rationale for treating all forms of post-school education together is strong. Yet further education and its students are grotesquely neglected in the public debate.

"Unfamiliarity, snobbery and sheer prejudice are some of the reasons for this neglect. It's time that changed. More money needs to go into the system, but on a different and much broader basis."

The paper is to be presented at a seminar at the IOE, 20 Bedford Way, London from 12 noon to 2pm on Tuesday, 13 February.