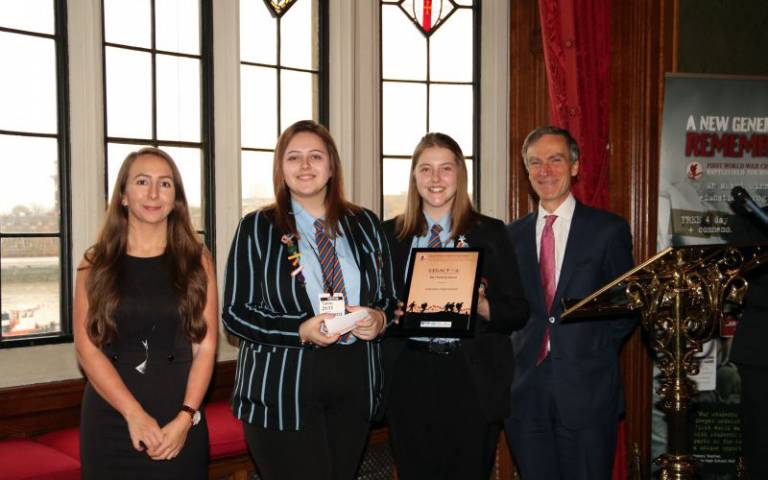 At the event hosted by Minister for Faith Lord Bourne, and attended by Neil Carmichael, former MP who was Chair of the Education Select Committee, and MP Dr Andrew Murrison, students received prizes for a wide range of creative projects, including YouTube films, drama performances, research projects and remembrance gardens.

The aim has been for all projects to reach at least 110 people in the local community, which would equal 888,246 people in total, the total number of British and Commonwealth soldiers who lost their lives during the conflict. However, the legacy projects have been so successful that this figure has been more than doubled.

The six winning schools were:

"Our annual 'Legacy 110' awards event in the House of Lords was a great way to celebrate the outstanding post-tour projects created by students up and down the country in 2017. We are incredibly proud of the diverse range of projects that students have come up with, and the way in which they have been able to communicate their experiences on the former battlefield to such a wide audience.

"I was honoured to attend the 'Legacy 110' awards that recognise the commitment and creativity young people and their teachers have shown in remembering the bravery of those who fought in the First World War.

"It remains so important that we remember their sacrifice. These inspiring students are finding creative ways to share their knowledge and ensure that local communities have a greater understanding of the First World War and the vital contribution made by their home town heroes."

The programme, together with tours provider Equity, gives two students and one teacher from every state secondary school in England the chance to visit the battle sites of the Great War. The £5.3 million programme is also jointly funded by the Department for Communities and Local Government and the Department for Education and is a key part of the Government's commemoration of the centenary of the First World War.

In the order in which they appear (left to right):