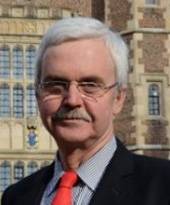 His background is as an English and Drama teacher in UK schools. He has had a particular involvement in the culture of boarding schools, having worked as a boarding housemaster and been head of three schools with a boarding dimension.

He is currently Honorary President of BSA (Boarding Schools Association). He has been a head teacher for 26 years, successively at Chigwell School (from 1989), Oakham School (from 1996) and Eton College (from 2002-2015). Over the years he has been a governor of 9 secondary schools, both state and independent, as well as 6 primary/prep schools: two of these secondary schools were newly created under the UK Government's Free Schools initiative.

Over the past 15 years he has become increasingly engaged in international education organisations and programmes including serving as President of the International Boys' Schools Coalition, chair of an association linking schools in China with schools in the West, Trustee of Afghan Connection and chair of the Mvumi School Trust, Tanzania.

He has particular interests in developing pedagogy and the benefits of digital education, interests that came into focus with the creation of the Centre for Innovation and Research in Learning at Eton College.