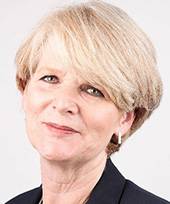 Mary Curnock Cook is an independent educationalist, with expertise in participation and progression in the different stages of education, and with a particular focus on those who are disadvantaged in education.

From 2010 to 2017, Mary was Chief Executive of the Universities and Colleges Admissions Service, UCAS, overseeing a transformation of the organisation's operations, communications and data services.

Prior to 2010, she was Director of Qualifications and Skills at the Qualifications & Curriculum Development Agency (QCDA). Earlier in her career she held a number of senior executive and non-executive posts in private, public and not-for-profit organisations in the biotechnology, food, hospitality and education sectors.

She is Chair of Governors at Kensington and Chelsea College, Chair of Trustees of the Access Project and a Trustee at the National Star College. She chairs the Local Governing Body at Swindon Academy. Mary is also a strategy advisor to the University of Buckingham.Mary has an MSc from London Business School. She was awarded an OBE in 2000 for services to training in the hospitality industry, and is an honorary Fellow of Birkbeck College, University of London.