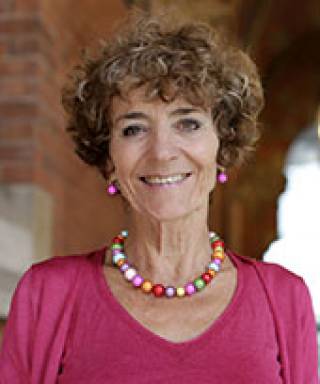 Celia was inspired by the vision of using digital technology to open access to mathematics and has led many research and development projects to promote this aim. She has published widely and worked constantly to change the public face of mathematics, initially by co-presenting a popular TV mathematics quiz show 'Fun and Games', which topped the prime-time ratings between 1987 and 1990.

The first recipient of the International Commission of Mathematics Instruction (ICMI) Hans Freudenthal medal in 2004, and of the Royal Society Kavli Education Medal in 2011, Celia received both awards for her research work. She was the UK Government's Chief Adviser for Mathematics (2004-07), and the director of the National Centre for Excellence in the Teaching of Mathematics (2007-13). She was President of the Institute of Mathematics and its Applications (IMA) (2014-15), the professional and learned society for qualified and practicing mathematicians.

Celia was made an Officer of the Order of the British Empire in 2004 and a Dame Commander in 2014. In 2016, she was selected for the Suffrage Science award for Communications to acknowledge her scientific achievements and ability to inspire others.