Multilanguage acquisition across the lifespan

A study investigating the effects of multilanguage acquisition on cognitive development.

Throughout history, philosophers, educators, health professionals, linguists and psychologists advocated either disadvantages or advantages of “being bilingual”. Researchers in the field have always been divided about the effects that learning multiple languages may have on cognitive development.

Early studies in which bilingual and monolingual children were compared with measures of IQ, reported a bilingual cognitive disadvantage. These results inoculated the general belief that being raised in a multilingual environment was largely detrimental for children’s intellectual development. However, recent studies indicated that acquiring a second language enriched some crucial aspects of cognition beyond the language system, such as the ability to inhibit irrelevant information.

In comparison to monolingual speakers, bilinguals seemed to adapt better to unexpected changes, and their level of executive function (i.e. those higher level cognitive abilities that allow us to operate effectively in complex environments) appeared to benefit from their enhanced linguistic experience.

A rather intuitive hypothesis, the Bilingual Advantage hypothesis, explains this data by proposing that the constant use of two or more languages and the intense, effortful demand of switching between languages that goes with it, may strengthen general non-linguistic abilities, such as selective attention. It was further proposed that lifelong experience of managing two languages in a single mind might attenuate the decline of cognitive processes as age increases. However, other studies have failed to replicate these positive findings, questioning the solidity of the methodological procedures.

The overarching aim of the project was to investigate whether a multilinguistic experience could confer a cognitive advantage across the lifespan, specifically from 7 to 80 years old. We used a developmental approach with a convergence of methods, including behavioural and neuroimaging techniques, to identify the mechanisms driving possible enhancement in interference control and differences in brain structures between multilinguals and monolinguals.

We also explored the extent to which these possible advantages extended throughout the lifespan, and offered a protective barrier against age related cognitive decline. In particular, we addressed three main questions:

In order to address the above research questions, we planned to recruit and test 360 participants aged 7-80 years old, with the intention to select 90 participants across the entire sample to carry out the neuroimaging part of the study. However, we managed to complete the project with a much larger number of participants. In total, we tested 566 individuals, half of them multilinguals and half English monolinguals. 118 of them took part in the neuroimaging study. The testing activities took place in two locations: Cambridge and London.

We used a battery of cognitive tasks that were calibrated for being administered to all participants. The tasks included:

A very detailed questionnaires was also included to collect important information about socio-economic status, second language age of acquisition and overall linguistic experience, providing the basis for identifying or ruling out other explanatory variables underlying any possible bilingual advantage.

This phase of the project was carried out at the Birkbeck/UCL Centre of Neuroimaging (BUCNI) in London. T1-weighted 3-dimensional MRI structural brain were acquired using a scanner equipped with several specialised surface and head coils (including a 32-channel head coil) for high-resolution neuroimaging.

Our findings revealed a more complex picture than previously reported in the literature. We have not observed any specific bilingual/multilingual advantage in control of interference and, more in general, in executive function across the lifespan. However, we found differences in brain structures. In particular, regions of the lower cerebellum presented different volumetric sensitivity in bilingual speakers.

We are particularly proud of this study that involved neuroimaging techniques such as Magnetic Resonance Imaging (MRI). Our lab started the investigation of the cerebellum in 2011 (Filippi et al., 2011) and provided novel data of its involvement in the control of verbal interference (see Figure 1). However, at that time, it was not possible to compare multilingual and monolingual speakers. Therefore, the question whether structures of the cerebellum could have been different only in bilinguals remained unanswered until now. 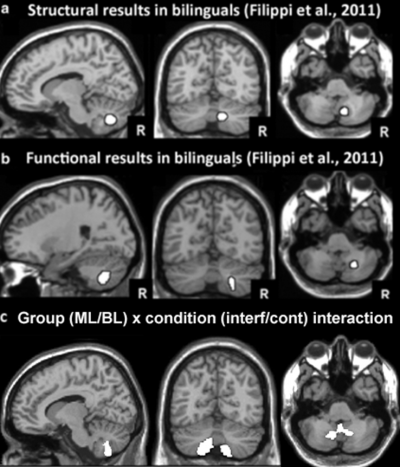 This Leverhulme funded project has allowed us to provide new evidence, demonstrating that bilingualism does indeed confer structural differences within lobule VIII and may play an important role in the resolution of linguistic competition in noisy environments.

The importance of socio-economic status in this research field

Another important finding that emerged from our studies is that socio-economic status is an important modulator in the interaction between multilanguage acquisition and cognitive development.

As mentioned above, in some cases we have not found any multilingual cognitive advantage across the lifespan, which in part contradicts claims that multilanguage acquisition confers long-term advantages in executive function and may protect against age-related cognitive deterioration.

To address this question, we assessed evidence for a bilingual advantage in older monolingual and bilingual residents matched on age, gender and socioeconomic status. A comprehensive battery of tests was administered to measure non-verbal reasoning, working memory capacity, visuo-spatial memory, response inhibition, problem-solving and language proficiency. Analyses, including Bayes factors, revealed comparable performance in both groups, with no significant differences on any task. Overall, therefore, our findings run counter to the bilingual advantage hypothesis.

Previous research on speech comprehension in noise indicates that a multilinguistic experience may confer advantages in filtering out verbal interference, an effect observed both in children and adults. We further investigated this phenomenon in a study involving 209 typically developing children (about half of them multilinguals from different linguistic backgrounds). We found no evidence for a reliable group difference in our data.  Instead, findings indicated that background cognitive ability and socioeconomic status were the best indicators of successful control of interference, irrespective of whether participants were bilingual or monolingual. We are currently analysing the performance of the adult population on the same tasks. We can anticipate that the results confirm what we had already observed in the study with children.

Throughout our project we became more and more convinced that the terminology used in most published research is not appropriate. In particular, we came to the conclusion that we cannot scientifically describe the "bilingual advantage" as a sort of universal skill which merely derives from acquiring two or more languages. It is perhaps more appropriate to describe this phenomenon as "bilingual effects". These effects are observable and statically relevant only in very specific circumstances that need to be further understood.

We believe that scientists in this field should be more careful in the way they disseminate their findings to the general public. We have directly experienced some misunderstandings deriving from a  misrepresentation of scientific results. We have been asked questions like: Is it true that if I become bilingual I won't get Alzheimer's? Is it true that bilinguals are more intelligent than monolinguals? These questions are the fruit of misinformation. It is the responsibility of the scientific community to convey the right messages.

Sadly, there are also misconceptions on the "negative" side of bilingualism. Many parents and educators still believe that raising their children as bilinguals may be detrimental for their "normal" cognitive development.  Still today, bilingual and multilingual school children in the UK are labelled as EAL (English as an Additional Language) pupils, which arguably implies a vaguely negative connotation or the categorisation of multilingual learners as having some sort of ‘special needs’. Anecdotally, there are still cases in which educators discourage multilingual families from raising their children as multilinguals. Such behaviour should be rendered unacceptable, and it is – at least in part - the responsibility of the scientific community to provide research-based counter-arguments against such discouragement.

Today, it is estimated that a large majority of people in the world speak two or more languages and that this majority is destined to grow as a consequence of migration flows and globalised employment opportunities. Multilanguage learning is an inevitable real life global phenomenon, and the impact of this escalating trend on cognition deserves careful and thorough analysis.

Scientists in this field should all work towards a more solid theoretical basis and a methodologically secure empirical approach for resolving the debate on whether (and how) multilanguage acquisition may impact on cognition. The developmental approach used in this research project may be the right method to clarify many of the still open questions in this line of research.

It has been a privilege to obtain this research grant and been given the opportunity to carry out research in this field. Our passion and commitment to this project has been unconditional and we are hugely grateful to all those who helped us and made this happen. We have increased the international visibility of our work and actively contributed to shedding new light on the topic of bilingualism. The quality and commitment of our collaborators has been truly exceptional.