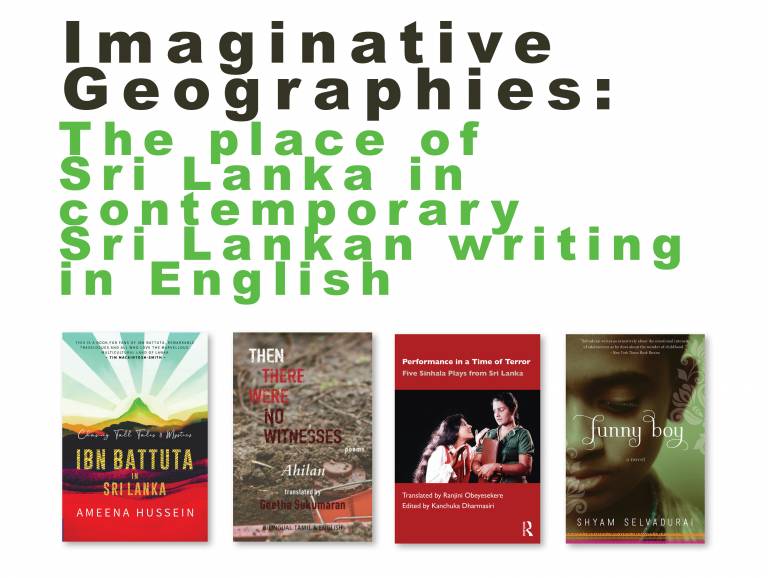 Join the event via Zoom here

This panel, co-hosted by the Department of English at the University of Colombo and the Centre for the Study of South Asia and the Indian Ocean World at UCL, will bring authors and literary critics into conversation on Sri Lanka as an “imaginative geography”. Taking its cue from Edward Said’s term “imagined geographies” it will reflect on Sri Lanka as a place which is imaginatively named, framed and worlded through literary narrative across different periods/moments in time. At the heart of such a mapping are questions concerned with apprehending place and locating ourselves within it, and also of epistemology, or how we know what we know, as well as the conditions under which knowledge materializes, sediments or ruptures allowing for alternative epistemologies to emerge.

The panel brings together authors who are Sri Lankan, or are of Sri Lankan origin, whose fiction, performance, poetry and travelogue are set in Sri Lanka. The conversation will touch on what it means to situate oneself as a writer in/of Sri Lanka in relation to citizenship, travel, war memory, politics, diaspora, gender and queerness. It will also dwell on literary genres – their hybridities and performativities, questions of translation and adaptation, and the material conditions (including writing and reading habits) that deterritorialize and re-territorialize Sri Lanka in particular ways for the contemporary reader.

The 90-minute panel will feature three themed conversations between Sri Lankan writers and critics based at the University of Colombo. The first between Ameena Hussein and Shermal Wijewardene on mapping and routes; the second between Packiyanathan Ahilan, Kanchuka Dharmasiri, and Ruhanie Perera on translation and poetics; and the third between Shyam Selvadurai and Neloufer de Mel on diaspora and exile. The panel will be moderated by Tariq Jazeel (Co-Director UCL-CSSA) and will include time for audience Q&A.

Professor Tariq Jazeel teaches in the Geography department at UCL and is founding co-Director of the Centre for the Study of South Asia and the Indian Ocean World. His work has explored the politics of cultural production in the context of postcolonial Sri Lankan nationhood.

Ameena Hussein is an author and co-founder of the Perera-Hussein Publishing House, the frontrunner for cutting edge fiction from emerging and established regional authors. She has published one novel and two collections of short stories. Her non-fiction book on the fourteenth century Moroccan traveller Ibn Battuta in Sri Lanka was published November 2020.

Packiyanathan Ahilan was born in Jaffna, Sri Lanka. Currently, he is a senior lecturer in Art History at the University of Jaffna. He has published three poetry collections: Pathunkukuzhi Naatkal (Bunker Days – 2001), Saramakavigal (Elegies – 2011), and Ammai (Mother – 2017). His most recent collection of poetry Then there were no witnesses (trans. Geetha Sukumaran) was published by Mawenzi House, Canada (2018). He writes critical essays on poetry, heritage theatre and visual arts.

Kanchuka Dharmasiri teaches at the Department of English at the University of Peradeniya, Sri Lanka and her research interests include contemporary performance, translation, and postcolonial studies. She recently edited Performance in a Time of Terror, Five Sinhala Plays from Sri Lanka (Routledge, 2021), translated by Ranjini Obeyesekere. Dharmasiri is also a theatre director and translator.

Ruhanie Perera is a performer and performance maker. She teaches at the Department of English, University of Colombo. Her research interests include storytelling communities and lived experience in performance. 'Inscribing Her' (2013) and 'Somewhere Between Truth and its Telling' (2012; 2018) are solo performances that reflect her preoccupation with the body and the lived experience of women.

Shyam Selvadurai is the acclaimed Sri Lankan-Canadian author whose first novel, Funny Boy, published in 1994, won the W.H. Smith/ Books in Canada First Novel Award and the Lambda Literary Award in the US. The novel has recently been adapted to an acclaimed film of the same name, directed by Deepa Mehta for which Shyam wrote the screenplay. All his novels, including Cinnamon Gardens, Swimming in the Monsoon Sea, and The Hungry Ghosts have been published in several countries and translated into several languages. He is also the editor of Story-wallah! A celebration of South Asian Fiction, Many Roads through Paradise - a collection of Sri Lankan literature, and three anthologies from a literary project titled Write to Reconcile which he conducted in Sri Lanka with emerging authors of fiction, memoir and poetry on the Sri Lankan war, reconciliation, memory and trauma.

Neloufer de Mel is Senior Professor of English (Chair) at the Dept. of English, University of Colombo, Sri Lanka. The author of Militarizing Sri Lanka: Popular Culture, Memory and Narrative in the Armed Conflict (2007), and Women and the Nation’s Narrative: Gender and Nationalism in 20th Century Sri Lanka (2001), her recent journal publications and edited volumes have been on postwar Sri Lanka, providing feminist, postcolonial and cultural studies perspectives on questions of justice, displacement, theatre for peacebuilding and disability performance. She is the chairperson of the Gratiaen Trust, which was founded by the Canadian-Sri Lankan author Michael Ondaatje, to recognize, foster and advance the cause of Sri Lankan creative writing in English. She has held several distinguished research fellowships at international universities and academic institutes including Yale, the Institute for Human Sciences in Vienna and the Universities of Zurich and New York and is an active participant in the arts in Sri Lanka.