VIRTUAL IAS Emancipatory Spaces from Camps to Cities: Refugees and the Built Environment 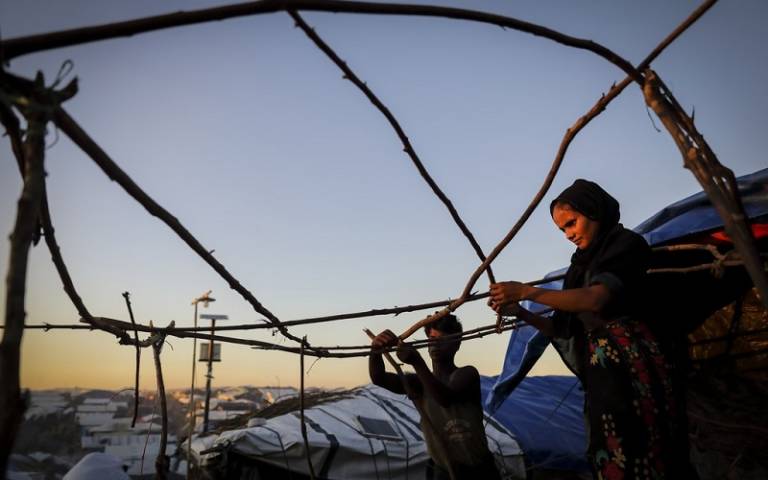 This roundtable addresses how refugees around the world have made a significant impact upon the built environment. Among camps, emergency shelters, and cities, forced migrations across the globe have affected how refugees have actively shaped urban development and their participation in local communities.

Join the zoom event hereThis roundtable addresses how refugees around the world have made a significant impact upon the built environment. Among camps, emergency shelters, and cities, forced migrations across the globe have affected how refugees have actively shaped urban development and their participation in local communities. Asylum seekers have travelled as far from Afghanistan through Indonesia in order to seek refuge in countries like Australia. Afghani communities have sprung up on the outskirts of Jakarta creating schools and other supportive means for their members. Over 740,000 Rohingya refugees fled Myanmar in 2017 seeking stability in Bangladesh. During the Covid-19 pandemic, Cox’s Bazar residents led efforts to promote women’s rights and public health information when resources became limited. Refugees assisted Oxfam in developing a pedal-powered, hand-washing station. 250 Tunisian migrants, who recently arrived in boats on the island of Lampedusa, needed to reside on the docks of the island while they waited for quarantine measures.

Invited speakers will present quick provocations of around five to seven minutes examining the role of the built environment in addressing 21st century needs of refugees, and how spatial concerns related to buildings and infrastructure can be better represented in humanitarian aid and policy. The rest of the roundtable will be devoted to an open discussion with the audience.

All welcome. A link to join the event will be published on this webpage. Register to attend at https://ias-emancipatoryspaces.eventbrite.co.uk Please do not hesitate to contact us if you need assistance on the day, and follow this FAQ link for more information and to read our virtual events code of conduct. All of our events are free, but you can support the IAS here.

Rohingya refugees make the frame for a makeshift shelter in a refugee camp.  Following attacks by Rohingya militants against several police posts on 25 August 2017 hundreds of thousands of Rohingya civilians fled their homes in Rhakine State, crossing over the border into Bangladesh as the Burmese military launched a furious response. In the month following the militant's attack almost 7,000 Rohingya civilians, including at least 730 children under the age of five, were killed. The UN have described military action as 'a textbook example of ethnic cleansing' and claimed the campaign to be 'clearly disproportionate'. By April 2018 around 900,000 Rohingya has fled into Bangladesh.