Anne-Christine Trémon is a senior lecturer in anthropology at the Université de Lausanne. She obtained her PhD at the Ecole des Hautes Etudes en Sciences Sociales (EHESS) in 2005 and since then she has been a postdoctoral fellow at the Institute of ethnology, Academia Sinica in Taiwan, a lecturer at the EHESS and the Ecole normale supérieure (ENS) in Paris, and a EURIAS fellow at the Netherlands Institute for Advanced Study in 2012-13. Her research examines Chinese globalisation and the Chinese diaspora in a global anthropological and historical perspective. She has studied the colonial history and contemporary identifications of the Chinese community in French Polynesia, and, more recently, the diasporic relations and social and economic transformations in a former emigrant village of the Shenzhen special economic zone in China. She is the author of two books (in French) and numerous journal articles among others in l’Homme, Anthropological Theory, Ethnic and Racial Studies, the J.R.A.I. and Mobilities.

Anne-Christine's research examines the Chinese diaspora from a global historical and anthropological perspective. Since 2011, she has been conducting fieldwork in Shenzhen, China, in one of the villages of origin of the Tahiti Chinese among whom she had carried out previous research (2000-2005). This peasant village has long been dependent on financial flows from overseas. However, it has been radically transformed and is now a prosperous neighbourhood of Shenzhen. She retraces the changing relations between local inhabitants of the village and their overseas relatives, and analyses their social and moral implications, their ambiguities and paradoxes. She gives particular attention to the way the diaspora has been instrumentalised in mobilisations aimed at saving two of the village’s most important symbolic sites (the ancestral grave and the school) from destruction by state-led urbanisation plans. Therefore, she has become interested in the local community’s relationship with the Chinese state and its moral economy in matters of public goods provisioning, and she is currently conducting a comparative team project on these issues. While at UCL’s IAS, she intends to work on two projects. First, a book manuscript that will be based on her two previous books in French. Second, an article based on recent material collected within the project she is leading on “Public goods in urbanising China”. 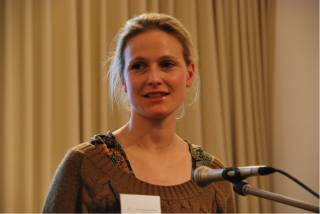