UCL alumna and author Jane Fallon returned to the institution last week to receive an Honorary Fellowship and speak to MA Publishing students. 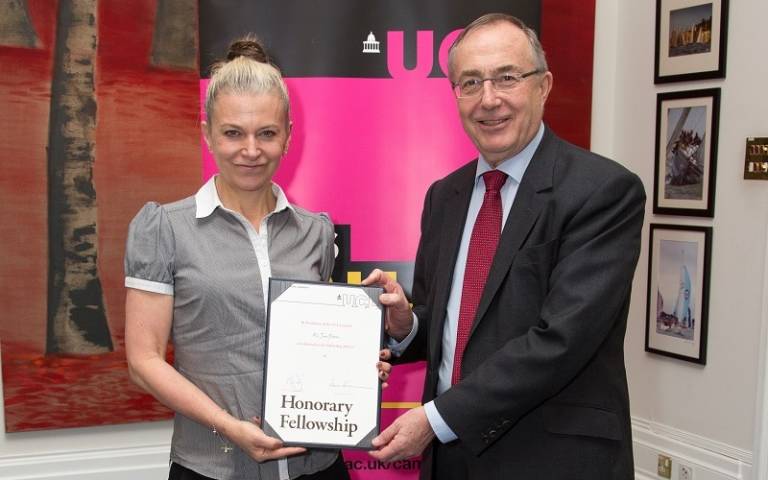 Jane Fallon (BA History, 1982) is at the top of her game. She has written nine best-selling novels since stepping away from her previous career as a multi-award winning TV producer and script editor for ‘This Life’, ‘EastEnders’, ‘Teachers’ and more. Her 10th novel, Queen Bee, is set to be published this year. In recognition of her continuing success, UCL is proud to have awarded Jane an Honorary Fellowship.

In an evening celebrating her accolade, Jane took some time to meet with students on the MA Publishing Course, including those who make up the editorial committee of the UCL Publishers’ Prize. The prize is organised by student volunteers from the course and it’s open to current students and recent alumni. Jane will also be on this year’s judging panel. The theme for 2020 is ‘Libraries’, which ties in with the Department of Information Studies’ centenary celebrations.

Born in Harrow, North London, Jane’s family moved to Buckinghamshire when she was a child. When the time came to explore options for university, Jane was single-minded.

“I only wanted to come to London,” she says. “And you know that thing where you just fall in love with a place immediately? I had that with UCL."

Initially intending to study law, the reality of the course wasn’t quite what she’d expected and Jane instead found her calling with BA History, switching after the Christmas break.

Alongside her studies, Jane started writing. She helped revamp the history department’s magazine, also writing for the university newspaper, London Student, and Pi Magazine. She says: “I knew I wanted to write in some capacity, but I didn’t know what specialism yet.”

Jane wasn’t sure what path to take after she finished her degree. “I had no idea apart from what I thought was a ‘pie-in-the-sky’ idea about writing novels, which I’d had since I was 5. I thought it was an unrealistic ambition. I believed you had to be from an upper-middle-class literary background to succeed.”

Instead, Jane took her first steps towards television with a job as a ‘Girl Friday’ at a theatrical literary agency. “It was a cross between a runner, a secretary and an office junior, she says. “I walked in and there were theatre posters all over the walls and piles of manuscripts everywhere. I thought ‘I LOVE this’.”

After three years, Jane was in charge of reading script submissions to the agency and decided to go freelance. She began working as a freelance script reader and editor for various shows, notably ‘EastEnders’, where she became a producer in 1994. In 1995, she was approached to produce a new low-budget drama for BBC2 called ‘This Life’ – now considered a touchstone of 90s British television. ‘Teachers’ and ‘20 Things To Do Before You're 30’ came soon after. Then, in 2006, Jane decided to take the leap into books.

“I had a really unlike-me flash of bravery,” she says. “I’m a complete insomniac and when I can’t sleep, I think of ideas. I was trying to come up with something for TV and somehow the idea for ‘Getting Rid Of Matthew’, my first novel, came to me.”

The book - a whip-smart comedic tale - became a national bestseller, as did her next eight novels which have been translated into more than 20 languages. The moment you achieve ‘success’ in your chosen profession isn’t always clear to see, but for Jane, it was hard to miss. “The buses!” she laughs. “We had ads on buses during the publicity for my novel ‘Foursome’ and I spent a whole day running around central London spotting them.”

Giving back to UCL 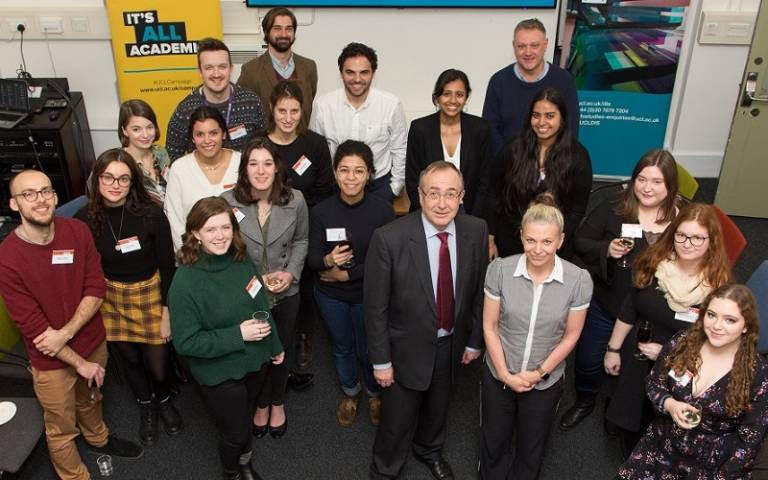 To tie in with her fellowship, Jane has recently been sharing her knowledge with students on MA Publishing. At an event on February 4, she explained how she begins to formulate a story.

“Ideas come from everywhere,” she said. “But I tend to start from the point of a relationship. Whether that’s siblings, friends or a traditional husband and wife relationship, there’s always a central dynamic that I’m interested in and I try to think about what I can do to people in that situation.

“I’ve always got an eye on the cliff-hangers, which I definitely took from my TV work,” she added. “It’s important to remember, the only thing you’ve got that nobody else has is how you tell that story in a way that’s different.”

When asked if she had advice for new graduates, Jane offered up a warning: “I think the main thing is to be prepared for a couple of miserable years of graft.” But while life may not be easy for an aspiring writer, Jane also emphasised the importance of seeking inspiration in the world around you. “You need to have some space to go out and experience life,” she said. “Otherwise you’ll have nothing to write about.”

Jane Fallon’s new novel, ‘Queen Bee’, will be published in April 2020. The winners of the UCL Publishers’ Prize will be announced at the UCL Festival of Culture in June.

If you would like to find out more about how you can get involved as a UCL alum, visit ucl.ac.uk/alumni/volunteer