We chat with two of the founders, Kisum Chan and Lincoln Lee on plans for Rice Inc. after winning the $1 million Hult Prize. 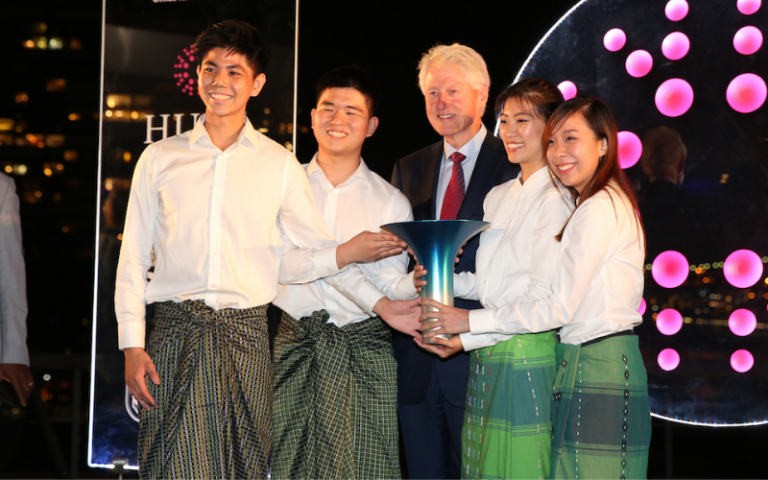 This time last year, Lincoln Lee (Biomedical Science) and Kisum Chan (Biomedical Science) were regular second-year students at UCL hailing from Malaysia and Hong Kong respectively. Today, the pair run their own social enterprise, Rice Inc., which could change the lives of over 49 million people by 2025.

Their plan is to make fast, effective and affordable rice drying available to smallholder farmers in Myanmar, Vietnam, Malaysia and the Philippines who typically lose about 20 percent of their harvest in the drying process.

“Right now, rice farmers are using traditional agricultural practices to dry their rice which involves laying the rice in the sun. The problem with this method is the rice is open to the elements, at any moment it could rain, a vehicle could drive past, even cows can come along and eat the grain,” explains Kisum.

By providing these farmers with biomass-fuelled dryers, the rice is protected from weather and pests and dries up to 24 times faster. The machines are powered by rice husks, currently a wasted by-product of the industry. The result will save 15 billion bowls of rice over the next 6 years.

The duo, originally a foursome with teammates Julia Vannaxay (MSci Statistical Science) and Vannie Koay (BSc Economics), came up with the idea while preparing for the Hult Prize.

The Hult Prize is an international competition that focuses on launching disruptive, impact-centered social enterprises. Each year the prize proposes a bold challenge aligned with a pressing global issue for teams to solve for a chance to win $1 million in seed funding. In 2018, the challenge was harnessing the power of energy to impact over 10 million lives.

While brainstorming for a solution the team struggled to find an idea that resonated. “Nothing seemed to stick. So we decided instead of looking for a solution to a problem that doesn’t exist, let’s find a problem instead,” said Lincoln. The team began researching key industries until they found a statistic they couldn’t ignore.

“We stumbled upon an article that said 80 percent of all rice is wasted before it even gets to the market. As a daily rice eater, this statistic was staggering,” said Lincoln. “We later found out that the article was fake and the actual loss is closer to 20 percent, but the seed had been sown and we knew we wanted to work in the rice industry.”

Having made it through the UCL round and London regionals the team travelled to Myanmar to pilot their idea, a process was more challenging than they anticipated. Thanks to the assistance of UCL’s Innovation and Enterprise department, the team were able to secure money to fund their pilot which was critical to enabling the team to win the next round in the prize.

“We changed a lot after the UCL round. We moved pilot operations from Vietnam to Myanmar, realised our initial machinery wasn’t what farmers wanted and discovered our business model wouldn’t work,” said Kisum. “But the trip helped us gather really important data.”

After the pilot the team worked on developing a solid business that is now actively working to solve global food insecurity, enabling generations to skip the poverty loop and creating more equitable ecosystems of supply and demand without adversely impacting the world's finite resources. Amazingly, they achieved all of this whilst studying full-time at university.

“It was ruthless prioritisation at every point,” said Kisum. “There was this constant juggling of tasks. I think the most important thing for us, and what made us successful I think, was that we never stopped juggling. We never gave up the ball. Once we knew what we needed to maintain our grades we put everything else into Rice Inc.”

Up against five other teams, one of whom was also working within the rice industry, the pair couldn’t believe they had won when their team name was called as the winners.

“It was out of this world. I was shocked but also relieved. We had put so much work into the project and we were under so much pressure throughout, to finally see our hard work come to fruition was incredible. It some regards it felt like a huge pressure had been lifted from our shoulders,” commented Lincoln.

Kisum said: “There is one moment I hold dearly – we were walking up on stage and everyone was cheering and I looked down to the front row and saw our mentors and those that had helped along the way. We had so much support from the Hult Prize programme but also from UCL and our own faculty. It was incredible, like something out of a movie.”

Both Lincoln and Kisum admit that they never pictured themselves pursuing a career in social enterprise. “I always thought that making money and helping the world were mutually exclusive,” admits Lincoln. “When in Myanmar a woman walked up and began thanking us profusely. She explained that without the dryers she wouldn’t have been able her sell her rice that season. For someone who has only two harvests a year and farming is her sole income, we were able to save 6 months of her salary and ensure she could afford to send her kids to school and put food on the table. That was the difference between pitching it in New York and seeing it with your own eyes. It hit me then - two totally different worlds but connected by the concept of social enterprise.

Kisum agrees and added that “Being able to see how you can create some value from nothing whatsoever, it was like magic. You can help people from just putting in the effort and trying. That was the turning point of my decision to go out on a limb and start my own business instead of choosing a safe, well-trodden career path.”

Bringing the rice to consumers

The $1 million prize is provided as an investment in the enterprise, rather than a grant, helping to assure some accountability for building the enterprise. As a result, the duo is now working on a consumer rice brand, bringing the rice from farm to table – an idea actually suggested by one of the judges at the final pitch.

Kisum said: “We are hoping the brand we are creating shows that just because you are selling rice doesn’t mean that you can’t care about the farmers and where the produce comes from.”

If you are interested in purchasing some of their rice or know anyone who would like to, please do get in touch with Rice Inc.

Lincoln will be attending the alumni reception taking place in his hometown of Kuala Lumpur on April 11 with President and Provost, Professor Michael Arthur. The reception is an opportunity for the university to recognise its global partnerships and celebrate our thriving alumni communities across the world. If you would like to get involved with your local alumni community, click here.