Alumni stories: bringing peace to children across the world with Rudrani Dasgupta

Driven by her passion for children's rights, Rudrani Dasgupta is using her UCL experience to improve lives in India and further afield. Rudrani Dasgupta has a fire in her belly for change.

After graduating from UCL in 2016, the 31-year-old worked to defend the rights of marginalised children in India, helped to draft Bengal’s child safety policy in schools, and piloted research on the impact of domestic violence on children. And that was just the beginning.

In February 2019, Rudrani co-founded Chai Ki Duukan. Recognised by the UN High Level Political Forum, this platform is designed to help young Indians and Pakistanis build friendships, despite the constant political tensions in the region.

While the passion is all hers, Rudrani gives a lot of credit to UCL for embracing her unique story. Since 2017, she’s acted as a mentor for UCL students via UCL Bentham Connect. She says: “I believe in UCL because UCL believed in me when no one else would.”

Discovering your own path

Rudrani grew up in Kolkata, Eastern India. In high school, as a student journalist, she was assigned to meet sex workers and their families in a red-light area. She says: “That day I realised that children were not always loved, or protected. They could be part of a system where they were exploited and abused.”

Rudrani went on to take a BA in English Literature at Jadavpur University and had applied to take her Master’s too. But then in 2011, she took on a six-month fellowship working with disadvantaged communities in London and the local children and government schools across the poor, desert region of Rajasthan.

She says: “I dropped out of my Master’s and taught at a school in a remote Himalayan region called Ladakh for two years. After that, I worked in an anti-trafficking NGO and developed a research paper on youth identity in Ladakh.”

These combined practical experiences both challenged Rudrani and shattered her, pushing her towards working with vulnerable children and young people – and she looked to UCL for the next stage of her journey.

After successfully applying to three other universities in the UK, Rudrani felt studying at UCL would allow her to specifically focus on children’s rights from a sociological perspective. Needing financial support, Rudrani successfully applied for the Centenary Scholarship and began a Master’s in Sociology in Childhood and Children’s Rights at IOE, UCL's Faculty of Education and Society in 2015.

She took on her course with gusto – becoming a member of the UCL Global Citizenship Programme, serving as a mentor in speaking skills for schoolchildren and co-founding the Thirst4Edu campaign to promote education for children displaced by disasters. Rudrani says: “If an education system is pro-people and fosters critical thinking and innovation, it can lift millions of people out of generational poverty and oppression. Education can create choices for people, it can expand horizons and abilities to question and critique.”

“Academically at UCL, I gained so much from discussions with my professors and peers,” she says. “Then there were the friendships and the heated debates. It all taught me to re-look at life, and at how I perceived the world. It was the best year of my life, no doubt.” 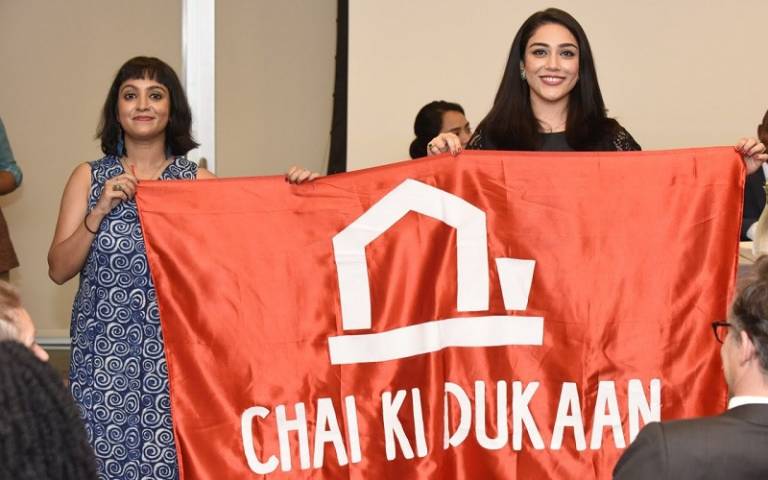 Of all the experiences Rudrani took from her time at UCL, meeting a fellow student, Ramsha Baluch, truly shaped her future career. She says: “We were classmates and then became friends, bonding over our shared sub-continental identity. She’s from Pakistan. Over many cups of chai, we spoke of things that united and divided our two countries.

“We discovered that in spite of their historically hostile relationship, we had a lot in common, talking religion, politics, biryani, gossipy match-making aunties...”

As a way to help bring together their two home countries, Rudrani and Ramsha decided to set up an online forum called Chai Ki Dukaan. “It was developed to showcase ordinary everyday stories of friendship between Indians and Pakistanis. We had a pretty amazing response as stories that are traditionally neglected by the sensationalist media came to the fore.”

The forum had such an impact on relations that it was picked up by the Voices of SDG16+ campaign – established by the UN’s High Level Political Forum on Sustainable Development (HLPF). At an event celebrating the campaign, Rudrani and Ramsha got to present their peacebuilding narrative in front of an encouraging international community.

Giving back to UCL

Among all the amazing ventures Rudrani is involved with, a big part of her continuing focus is volunteering for UCL. Since 2017, she’s been working with current UCL students, and helping ease the worries of those looking to apply to UCL IOE. “It helps me give back in a way. I wish I had proactively reached out during my time, maybe some of my fears would have been allayed,” she says. “It’s an interesting thing, because most are international students who are understandably often apprehensive about making such a big career move.”

To potential students, Rudrani’s message is always clear: you’ll be accepted at UCL, no matter your interest. She says: “There will always be obstacles for those choosing non-linear career paths. UCL isn’t one of those places. In my experience, UCL will always try to make space for your uniqueness.

“It is okay to be different, the search might take you longer, but you will always find your tribe.”

Join the UCL Alumni Online Community (AOC) to search the directory for potential mentors from our pool of experienced alumni, search for jobs from your alumni community and build your personal network