One of the greatest challenges in medical science is the fight against cancer. Thanks to a combination of philanthropy and private donations, funding the work of some of the world’s top academics, UCL is a leading centre in this ongoing battle.

The innovative and groundbreaking immunotherapy trials carried out at UCL Cancer Institute are just one strand of the university’s research – making major breakthroughs in our understanding of the disease and leading to real-world implementation of new treatments.

But as well as the wider picture, it’s important to recognise the huge impact the trials have on the individual patients who take part. Their personal stories are all different, but have one thing in common: UCL’s programme was their last chance at survival.

Sophie Hodges, from Somerset, is just one example.

In 2013, Sophie was a horse-mad 17-year-old, riding in events and training her own horses. She also worked in a bridal shop, which she thoroughly enjoyed. Always active, she was something of a workaholic. But everything changed when she started to feel unwell.

She explains: “I worked seven days a week with only the odd Saturday off, so we initially put it down to tiredness. Then I had a nosebleed that wouldn’t stop, and I panicked. A doctor said to us ‘we think we know what it is, it is curable, but another doctor will talk to you tomorrow’. Then I was told I have leukaemia. At 17, I was just getting into adult life, and it just hit me. Everyone was shocked.”

Sophie was diagnosed with B-cell acute lymphoblastic leukaemia (ALL), and entered into a two-and-a-half year chemotherapy programme at Musgrove Park Hospital in Taunton. All seemed to be going well until, in 2016, Sophie relapsed. She had a bone-marrow transplant, but then suffered a further ‘CNS relapse’ - the leukaemia was attacking her central nervous system.

Sophie seemed to have run out of options. Tragically, palliative care was the only help on offer to her through regular medical channels. Then her consultant in Taunton raised the possibility of her taking part in UCL’s CAR T-cell therapy trials.

CAR T-cell therapy - a type of immunotherapy - is a pioneering leukaemia treatment, based on the research of UCL Clinician Scientist Dr Martin Pule, with clinical trials running at UCLH and Great Ormond Street Hospital. T-cells (a form of white cell/immune cell), usually harvested from the patients (autologous) or less commonly from a healthy donor (allogeneic), are re-programmed as cancer-targeting chimeric antigen receptor T-cells (CAR T-cells) and injected back into the patient’s bloodstream. These modified cells track to the site of disease, recognise and kill the cancer cells. They are then incorporated into the patient’s immune system, hopefully long-term.

“This work is hugely significant,” explains Dr Maeve O’Reilly, a Clinical Research Associate at the UCL Cancer Institute. “It’s revolutionary in the world of B-cell acute lymphoblastic leukaemia and B-cell lymphoma. Ultimately, our hope is to apply what we have learned from the use of CAR-T cells in haematological malignancies to solid cancers. It represents an entirely new modality of therapy which was previously unavailable to patients.”

In July 2018, Sophie Hodges’ T-cells were harvested and six weeks later the modified cells were injected back into her body. She was monitored very closely during treatment. As expected, her temperature rose after the initial injection - “the T-cells were getting all excited” as she puts it - and she had to stay in London for around a week, but then she was free to go home and mix weekly visits to Musgrove Park with monthly trips to UCLH to see Dr Claire Roddie, who is responsible for her care.

The treatment did give Sophie a scare along the way. A few weeks after discharge from hospital, she developed headaches. “I was really poorly, so my dad took me straight to London. It was quite scary but it is a known side-effect of the treatment and they did warn me it might happen.”

Dr Maeve O’Reilly elaborates: “Sophie suffered symptoms suggestive of neurotoxicity, which are a known side-effect of CAR T-cell therapy. The severity of these symptoms can vary widely  from patient to patient. Fortunately these effects are rapidly reversible with steroid therapy, as they were for Sophie.”

Talking to us in February 2019, Sophie is doing well - her leukaemia is in complete remission. She is riding her horses again, although only in dressage events as she is not yet strong enough to participate in jumping. She is undertaking a book-keeping course as a potential future line of work, but her main goal is to return to working in the weddings market, potentially as a bridal consultant. “I really want to do something with my life that I enjoy,” she says.

Sophie is full of praise for Dr Roddie and the UCL team who have administered her treatment. “The care in the hospital has been amazing,” she says. “The team are just so kind.” Asked if she can sum up what CAR T-cell therapy has done for her, she says: “It has hopefully given me a chance to go on and be ‘normal’. I want to just get on now, live life day by day and make the most of it.” 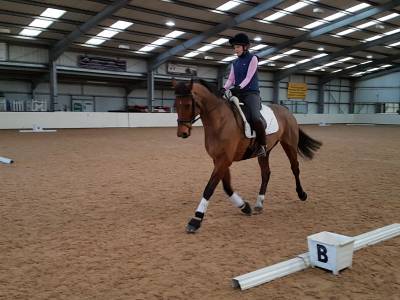 It is sobering to think that without undergoing UCL’s trial, Sophie would almost certainly not be here now, planning her future. But none of this would have been possible without the generosity of philanthropists and private donors.

“Philanthropy makes it possible to provide these therapies to people who need it most,” says Maeve. “Our patients had no remaining treatment options, but thanks to the generosity of our donors, they now have a second chance at life.”

In September last year, a commercial deal between NHS England and the pharmaceutical company Novartis has led to the availability of Tisagenlecleucel (a licensed CAR-T cell product) in key UK centres for patients up to 25 years of age with B cell acute lymphoblastic leukaemia that has relapsed after or is refractory to standard therapy.

While this is a fantastic step, UCL Cancer Institute’s work continues and more funding is needed to reach more patients. “All of this research is made possible by people realising that donations make a huge difference and allow us to carry on our work,” says Maeve. “It’s something that we are all eternally grateful for.”