Dr Rajvinder Karda and her team are focusing on the development of gene therapy for early onset, incurable, genetic diseases of the central and peripheral nervous system. 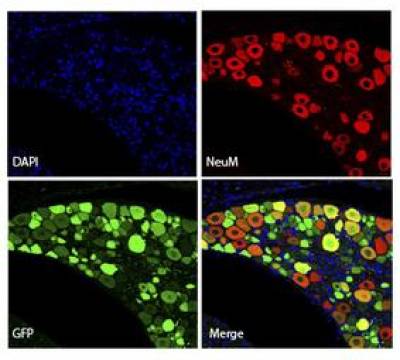 Dravet syndrome is an incurable inherited childhood epilepsy. She recently obtained UK Medical Research Council funding, in collaboration with Drs Stephanie Schorge (UCL Institute of Neurology) and Simon Waddington (Institute for Women's Health) to perform preclinical studies of gene therapy in a mouse model of Dravet Syndrome. Under the supervision of Dr Karda, Mr Juan Antinao Diaz is pursuing a separate project to exploit the efficiency of adeno-associated viral vector to achieve novel delivery methods of the affected gene.

During her doctoral thesis, she developed tools to allow the easy generation of somatic transgenic rodents. This technology permits the interrogation of signalling pathways, through transcription factor activation, via whole body bioluminescence imaging. This led to publication of the proof of concept studies in Scientific Reports and a subsequent study using this technology to generate biosensors to study liver fibrosis.  Dr Karda has now exploited this technology to study signalling pathways in the brain and her work has been showcased as a means of reducing numbers, and improving welfare, in animal research.  She has also advanced this technology in order to exploit the efficiency of gene delivery using adeno-associated viral vectors.

To optimise and exploit novel DNA production processes, Dr Karda spent a year working with Touchlight Genetics and will be presenting the data as an invited speaker at the 2017 conference of the British Society for Gene and Cell Therapy, in Cardiff, Wales.

Dr Karda has co-authored reviews on gene delivery to the developing brain and new developments in genome editing and stem cells and has co-authored an editorial on gene therapy for cystic fibrosis.