Why men pose as spoilt children

In Chinese, 'sajiao' means to deliberately act like a spoiled child in front of someone because of the awareness of the other person's affection. Young women are supposed to do sajiao a lot in daily life. The commonplace gestures of 'sajiao' appearing on social media is to post photos showing oneself pouting with big puppy eyes, or to cover half of one's face to show shyness and vulnerability. Offline, it is only legitimate for young women to show such vulnerability and cuteness, but online men are also starting to post sajiao photos of themselves.

Yulin Zhu, a middle-aged factory worker who accidentally cut himself (lightly), posted a photo of his injured finger online, saying: "I got injured, I need someone to comfort me and bring me some fruit!" Here we see 'Sajiao', a typical female behaviour used to win men's affection, appropriated by a middle-aged man on social mediaBoth in the job market and marriage market, young women are at an advantage. Young women are the favoured work force by the factories, and have greater opportunity to use marriage to improve their social status and financial situation compared to young male migrants. Yet men retain the prime responsibility for supporting the family financially. As these pressures of 'being a man' grow offline, men (sub)consciously seem to start to behave more like young women online who can use sajiao to release such frustration. 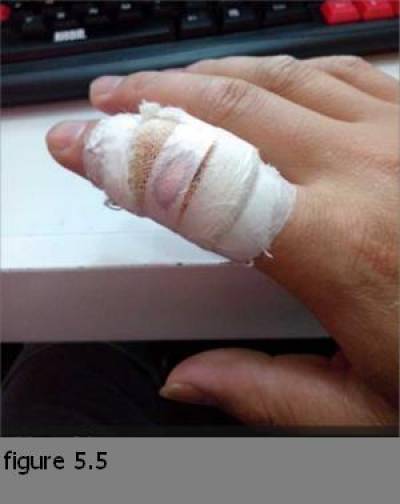