When twenty-five-year-old Jhony, a member of the Red Foxes Motor Club, bought a large Samsung tablet phone, he took it to a barbecue with his fellow motor club members. Over Escudo beers and smoke from the grill, everyone gave Jhony suggestions of apps to download.

After creating a WhatsApp group to organise events with the club, Miguel suggested he install Instagram.  "What's Instagram for?" asked Jhony. Miguel explained, "You upload pictures and the whole world says 'I like it!' It's good for self-esteem". Paul, another member of the group added, "You take pictures of ugly people like us and we come out looking good. It works like magic". Jhony downloaded Instagram and took a few pictures at the barbecue. But as he scrolled through other Instagram accounts to get a sense of the app, he noticed a lot of selfies. He took a few of himself with meat from the grill, but did not publish them. Something just seemed 'off' about them. Finally he got all seven of the motor club members at the barbecue to pose with him and snapped a shot. Without adding any filters or editing the photo, he uploaded it with the caption "feos como nosotros", or "ugly people like us". 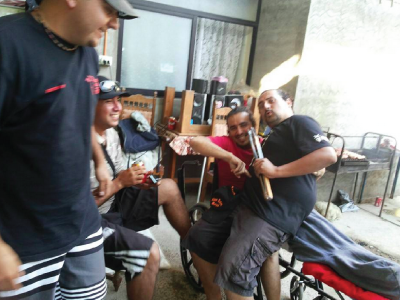