Roger is 23 years old. To his friends, he is a 'limer': he hangs out, drinks and tells jokes and is the life of the party. Roger has a reputation to uphold of being a cool laid-back guy. But this year his girlfriend first cheated on him with a friend of his and then broke up with him to start a relationship with the other guy. Although Roger was extremely hurt and had no problem talking about the effect it had on him to his very close friends, he didn't want to reveal his feelings in front of everybody he knew and, especially, not on Facebook.

Around the same time, an advertisement came out for Lipton tea. In the ad, Kermit the Frog is sitting in a café watching the chaos of a New York City street from inside. He sips calmly on his cup of tea and says the catch phrase 'But that's none of my business'. The memes appeared in the Trinidad fieldsite where the catchphrase was used to call out the behaviour of another person or group. Quite serious critical comments might circulate under the guise of this type of humour.

Roger, for example, shared a meme of Kermit with the caption: 'You be lurking on my page cause you miss me but that's none of my business.' Although the issue of cheating was hurtful to Roger and he had heard from friends that his girlfriend had been looking at Facebook to see if he was with another girl, this example is representative of a genre of meme that makes fun of issues that would otherwise be taken too seriously (even if they have serious implications) but they get the point across using a humorous visual reference. 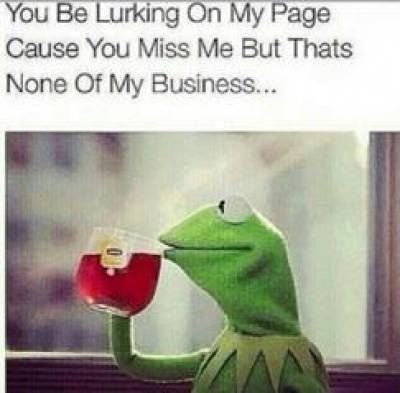