Architecture and immigration in London: the lost history of Limehouse Chinatown, 1900-1970

Tracing and mapping a history of the lost architecture and community of London's original Chinatown, with in-depth interviews with some of the elderly displaced. 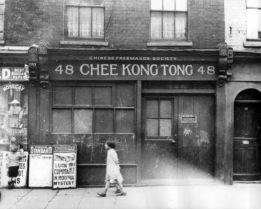 One of the touchstones in the discussion of 'building sustainable communities' in Britain is the death of the old East End of London. In its history of 150 years of pioneering and innovative social housing developments, Tower Hamlets hosts some of the most architecturally and historically significant social housing in Britain. Recently, there has been an increase of attention to the ways the diverse built environments and regeneration projects in this borough have shaped and informed the experiences of their residents. However, the experience and displacement of immigrant communities has been largely overlooked.

This project aims to fill this gap, tracing a history of the lost architecture and community of Limehouse Chinatown, displaced during 1930s slum clearances and Tower Hamlets council housing developments of the 1960s. Besides mapping the changing of the Chinese spaces from the 1900s to the 1970s including Chinese community centre, restaurants, boarding house, laundries and schools, the research also includes in-depth interviews with some of the elderly displaced Chinatown community.

This research aims to trace an important moment in the vanishing of Limehouse Chinatown. It can contribute to the fields of the architectural history of social housing (e.g. Darling, 2007, Pepper, 2008) by including the experiences of (Chinese) immigrant communities. The vulnerability of the surviving elderly Chinese community, and the remaining buildings and cultural artefacts, underlines the timeliness and urgency of such a project.

The increasingly diverse societies resulting from the influx of migrants and ethnic minorities will inevitably intensify the need for reconciliation between the host society and its minority communities. The research attempts to write an architectural and urban history that deals rigorously with interactions between dominant host and immigrant communities.

This research is supported by the Urban Laboratory and is supervised by Ben Campkin.

Dr Yat-Ming Loo is an architect. He holds a PhD degree in Architecture and Urbanism from the Bartlett, UCL. His PhD thesis which examines the postcolonial architecture and urban space in Kuala Lumpur was shortlisted for RIBA President's Award for Outstanding Thesis 2010. He teaches in the MA Architectural History at the Bartlett, UCL and University of Brighton. His main research interests include postcolonialism, minority spaces and politics of urban spaces. He is particularly interested in exploring the potential ways of seeing, researching and designing architecture and urban spaces with inter-cultural sensitivity, connecting the issues of cultural identity, margins, migration and globalization.