Congratulations to Tom Farshi from UCL Computer Science for submitting the winning entry in our 2020 photography competition, ‘Nocturnal demolition’. 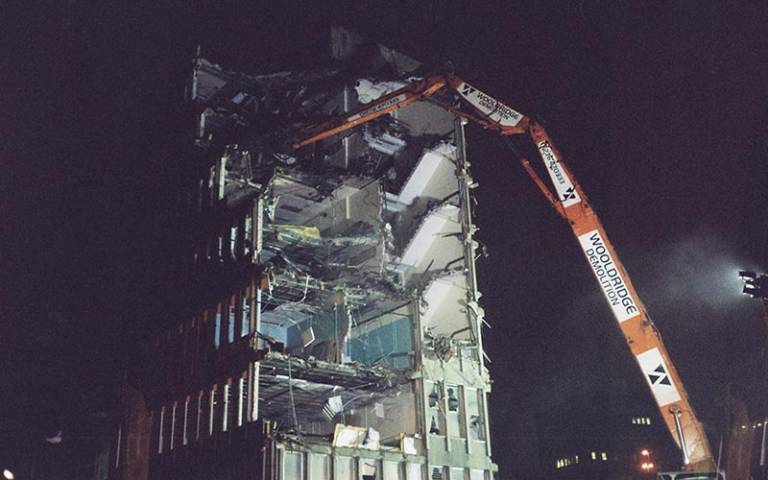 Our photography competition was open to entries from UCL staff and students connected to our Waste annual theme.

The winning entry was taken of a nocturnal demolition scene in Bristol. Farshi said: 'I joined the other spectators and watched as hydraulic shears pulled pieces off the building. This process only took place at night, and not long after this building had disappeared.'

Among our judges' comments:

Wonderful dramatic image, great lighting, dynamic interaction of machinery and building in process of disembowelment by night. Focuses attention on the waste generated by building demolition and replacement and the intricate processes of sorting different waste and reusable components involved in the dismantling of the urban fabric.

A nicely framed shot, with the photographer choosing a precise moment of composition in a process of violent destruction. It’s the only photograph we received taken at night, which puts the viewer in a different, more dynamic relationship with waste; night as the time of urban cleaning, maintenance, demolition. I like the drama and violence of the image and that it represents the action of wasting a building, not simply the end product (waste). The photographer is witness, not observer.

Second place went to Rohit Lahoti in The Bartlett Development Planning Unit, UCL, for their photo 'Waste: by the human, of the human', picturing a woman standing in the rubble of her home after being forcibly moved.

Third place was awarded to Carla Washbourne, a Lecturer in Environmental Science and Policy at UCL STEaPP, with a photo from their PhD research capturing the patterns found in waste from a production process at an active dump in Northern England.

The final runner-up, in fourth place, went to Javiera Sanchez Rios from the UCL Institute of Education. 'Between the waste and the sacred' pictured a scene in the Indian city of Varanasi, where waste management is a major challenge due to the impact of tourism.

The winner receives a £100 prize, and the three runners-up £20 each. You can view a number of the submissions to the competition in our Flickr album.