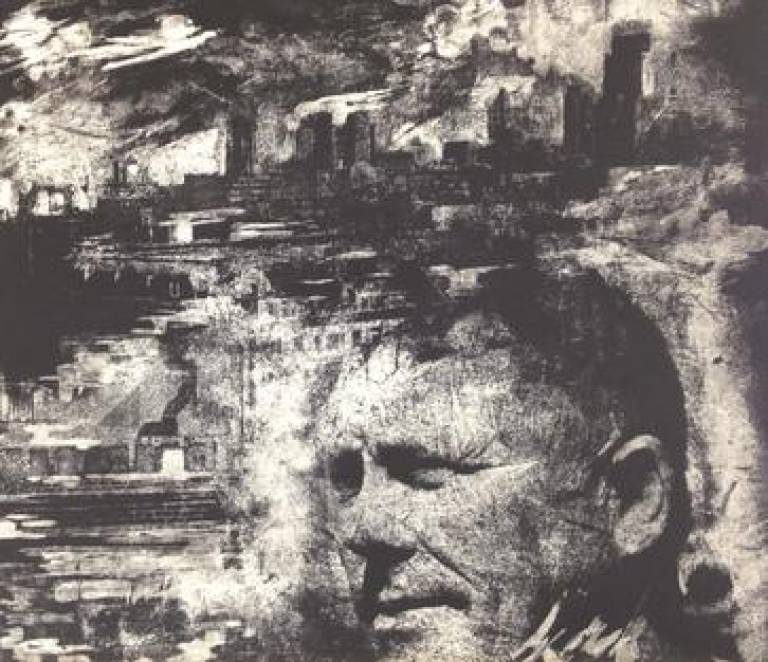 As part of the 2015 UCL Festival of the Arts, taking place between 18-22 May, UCL's Artists-in-Residence (AiRs) have come together for the first time to exhibit their work and exhange dialogues on the role of art within the diverse academic communities across UCL.

Max Colson and Tom Wolseley, current Leverhulme Artists-in-Residence at the Urban Lab, are displaying their work and taking part in a panel event on Wednesday 20 May, alongside Hilary Powell, based in UCL Chemistry and current Urban Lab Steering Committee member, and Rebecca French, a Visiting Research Fellow in the Bartlett Faculty of the Built Environment.

The panel on 20 May will be chaired by Dryden Goodwin, Reader, Slade School of Fine Art, and focus on the artists current projects, experiences of working at UCL, and the process of working within academic departments whilst using diverse methodologies.

You can see the posters of Urban Lab artists displayed in the Wilkins North Cloisters of UCL between 18-22 May and on Flickr.

Shardology is a project by UCL Urban Lab Leverhulme Artist in Residence Tom Wolseley in collaboration with UCL geographer Andrew Harris. Tom Wolseley works across disciplines creating narrative based films that explore complex subjects as well as reflexively his own methodological process.

Images of Enjoyment and Spectacle

Max Colson's photographs investigate controlled urban spaces. He is a Leverhulme Trust artist in residence at the University College London Urban Laboratory, where he is collaborating with its Director, Dr Ben Campkin. These pictures will be exhibited at his UK solo show Security and the Urban Imagination, at RIBA, 9 July - 25 August 2015.

Rebecca French & Andrew Mottershead make situations in which people can think again about who they are, their ties to place, and one another. They use art as a site of experience, by engaging mind and body with tangible narratives that disturb and develop the sense of self in our fast-evolving environments.Performed Power in Public Space - Creating a number of exploratory sketches looking at street harassment - the everyday unpleasant and scary interactions that play out in public space - the staring, the catcalls and insults, the gropes, the 'accidental touches', the assumed access.Afterlife - A developing series of audio narratives that invite listeners to reflect on what happens to their body after death in different environments - a deciduous woodland, a climate-controlled art museum, an urban waterway and a domestic space.

Print experimentation and salvage exposing the hidden chemistry and material stories of an urban environment undergoing constant transformation and those who work implementing this change.

Print experimentation and salvage exposing the hidden chemistry and material stories of an urban environment undergoing constant transformation and those who work implementing this change.  Supported by UCL Grand Challenge for Sustainable Cities. Associated project of London Festival of Architecture 2015.