Urban Pamphleteer is 'Magazine of the Week' on MagCulture 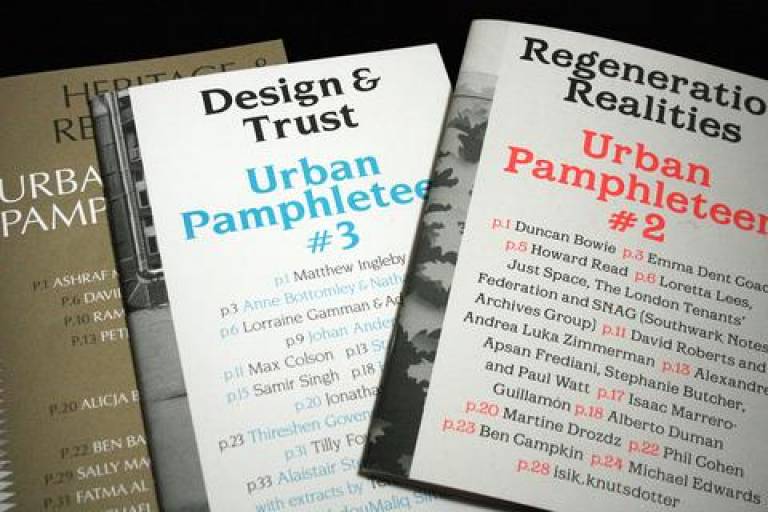 Urban Pamphleteer is produced by the UCL Urban Laboratory, with additional funding from the UCL Grand Challenge for Sustaiunable Cities. The publications confront key contemporary urban questions from diverse perspectives, written in a direct and accessible tone.

The media website complemented the accessible and innovative design of the pamphlets, saying: 'For a publication that encourages urban interaction between the streets, the buildings and the people of a neighbourhood, this design makes a lot of sense: the layout is like a complex but perfect puzzle where each square section comes together harmoniously.

'In the 17th Century, pamphlet writers would use language that was easily accessible so that all sorts of readers could understand the radical ideas printed on the page. 21st Century Urban Pamphleteer uses design as a universal language to convey and emphasise the information in the text. Their visual eloquence is why Urban Pamphleteer is our Mag of the Week this week: it's the kind of publication that you wouldn't say no to if it were being handed to you on the street.'

The Urban Pamphleteer series is designed by Guglielmo Rossi and edited by Ben Campkin (UCL Urban Laboratory) and Rebecca Ross (Central Saint Martins). Four editions have been published so far, available online as pdfs. Two further editions are due to be published this year on Open Source Housing and Global Education for Urban Futures.

In December Pamphleteer was featured in an article by It's Nice That, who described it as 'densely packed with information'.