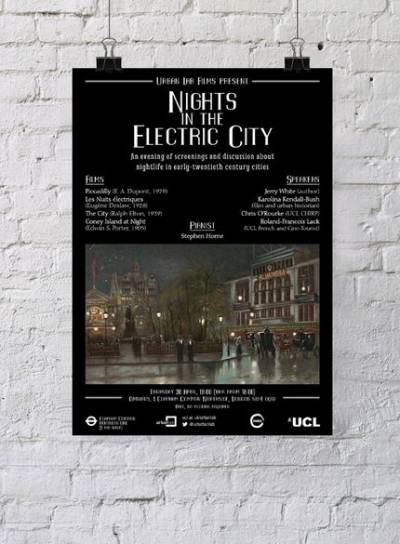 Hosted and run by the UCL Urban Laboratory, Urban Lab Films produce ambitious and popular salon-style events in a range of London venues. Films are used here to document cities and their social lives, to narrate history, tell stories, provoke debate, raise awareness of contemporary challenges, and mobilise new approaches to address them.

In a rapidly urbanising world, the series points to interactive relationships between urban environments and film, asking how they shape each other, and examining cities of the past, present and future at different scales, in all their human, built and environmental complexity. The programme focuses on issues critical to contemporary culture and public debate including housing, social justice, education, infrastructure, security.

The events are as much about facilitating public debate informed by scholarly and artistic practice as they are screening films. Sites are chosen for their appropriateness to each theme, and the audiences it intends to engage. Advertising the events through the venues' own channels means that audiences are more diverse than they could be through an on campus screening programme, and issues of import to local communities can be brought productively into the conversation.

Urban Lab Films programming is driven by partnerships with activists, artists, researchers, students, and organisations. We have a rolling call for film series or screening proposals. Please get in touch with us (urbanlaboratory@ucl.ac.uk) for more information.

View our Urban Lab Films events (to see past events, click back through calendar)