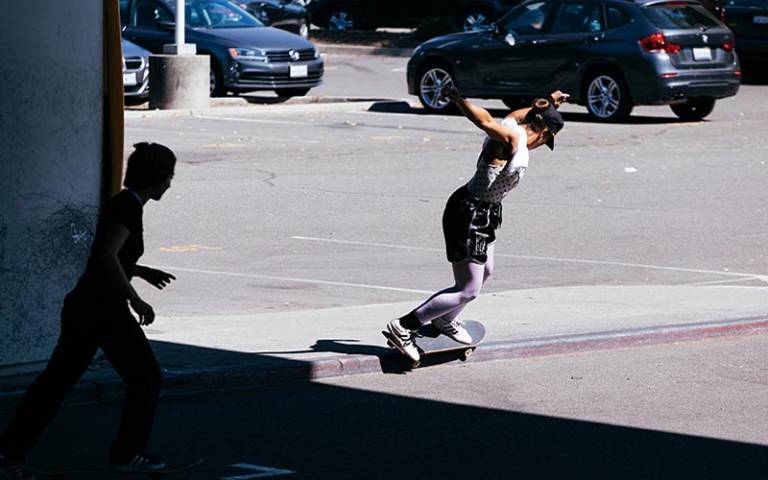 Unfortunately, due to the ongoing Covid-19 crisis, this event was postponed. The digital, open access version of the issue will be published on 29 April 2020 via the Urban Pamphleteer website. A launch event will be organised later in the year.

As skateboarding continuously responds to surges of urbanisation around the globe, it begins to reflect and refract the situations it finds itself in. Skateboarding is increasingly seen as a tool that can effect positive change. It allows for an expansion of the senses, seeing the possibilities of ourselves and our environments differently. Contrary to popular conceptions of skateboarding as an act of the individual, we argue that skateboarding has a broader capacity to generate an affective and intimate form of being-withothers. Skateboarding is collective.

In 2020, skateboarding is undeniably in the mainstream. Its subcultural capital has been co-opted and commodified by corporations, property developers, and city managers. As of this year, it is an Olympic sport. While in theory ‘skateboarding’ has been welcomed by cities around the world, the practices it encompasses, the diverse spectrum of skateboardings, and the hundred visions and revisions of what skateboarding is to each skateboarder, are often subsumed and overlooked.

Beneath the utopic view of skateboarders as an inherent public good, as creative agents transforming disused parts of the city, this issue gathers activists, artists, and educators who show more nuance within skateboarding. The lived experiences of skateboarders of colour, of diverse genders and sexualities, of different mobilities and class backgrounds, intersect with the politics of their everyday lives and negotiations with public and private space. With this in mind, we ask: what does a skateable space look and feel like, and for whom? Does skateboarding benefit from accessible urban design, and if so, why? Can skateboarders be good partners for cities?

Despite the refractions and reflections of contemporary progression and inclusivity, skateboarding comes laden with habits of misogyny, homophobia and racism. If skateboarding is collective, we have a responsibility to address these issues. This issue of Urban Pamphleteer brings together those who — rather than accepting the mantra ‘shut up and skate’ — use their voice to push forward debate about the role of skateboarding in effecting urban and social change.

This issue has been guest edited with Thomas Callan-Riley and Sander Hölsgens, and supported by UCL Culture.

All welcome, no booking required.