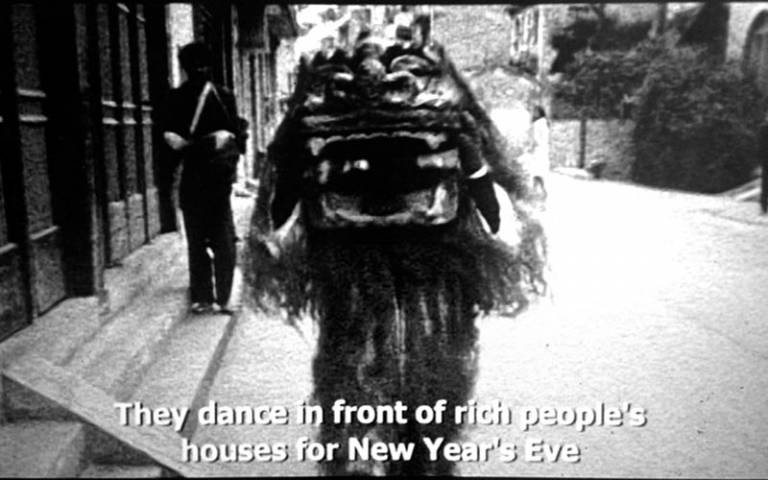 Urban Lab Films screen a collection of films reflecting on the social impact of architectural transformation as part of the City, Essay, Film series

This final screening presents a collection of works contemplating the social impact of architectural transformation, led by Xiaolu Guo’s brave and intelligent film on the moral and human cost of creating a ‘New China’ in The Concrete Revolution.

The screening is introduced by Kyran Joughin (University of the Arts London), a lecturer and researcher in film and time-based media, concentrating on the interaction between film, public art and architecture.

The films in this programme include:

Part objective documentary, part personal essay, The Concrete Revolution charts the transformation of Beijing in the lead up to the 2008 Olympic Games. As shiny new buildings and icons of western consumerism are rapidly built, the Chinese Government simultaneously hide the hardship of the peasant construction workers of the new China, and the disappearing world of its culture-carrying elders. Interrogating beneath the façade, the film exposes the unseen changes in values and the social costs being payed. Told through the contrast of individual's stories with elements of retrospective context, the film functions as a feminine poem on a macho subject using a clever mix of colour and black and white film, stills, snippets of media newsflashes and even quotes and songs from Maoist China. A singular brave, intelligent and important work.

The starting points of The Visitor are several conversations with Pritzker Prize-winning architect Wang Shu and a filmic exploration of Ningbo Museum of History (completed in 2008), constructed from the debris of the 29 villages utterly eradicated to make way for the new district of Yinzhou (Ningbo, China). In exploring in an experimental, transcultural and cross-disciplinary way the artist/architect’s reciprocal relation to the city, the film offers a reading of materiality and ephemerality in relation to the presence of absence of the destroyed and reconstructed urban space. The Visitor offers a reading of the museum’s presence, as providing an unofficial memorial to China’s colossal peacetime destruction.

Award-winning animated short film about the interior of an ‘iceberg’ home (a London home where the sub-ground levels are larger than the house above). Construction Lines shows this iceberg home rendered as a 3D model, using the original architectural plans and the software ‘Sketchup’. The narrative of the film, the model of the home and the scenes played out within it are informed by the objections filed against the planning application, as well as online articles speculating about the lives and lifestyles of the super-rich.

Image: Still from The Concrete Revolution. Courtesy of Xialou Guo.