Fact 1: Staff costs have declined as a proportion of university expenditure 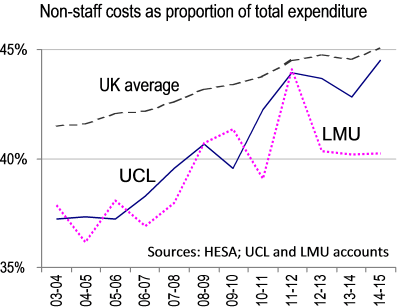 The graph above shows where university income is actually spent.

So-called 'non-staff costs' (primarily buildings) have increased steadily as a proportion of expenditure over the last ten years. The trend for the booming pre-92 University College London (a USS institution) is similar to the post-92 London Metropolitan University, which has lurched from crisis to crisis over the same period. (Source: Holmwood et al. (2016: 11), In Defence of Public Higher Education. HE Convention.) Holmwood et al. comment:

" " UK-average data from the Higher Education Statistics Agency shows an 8.7% growth from 41.5% of expenditure in 2004 to over 45% in 2015. UCL grew its non-staff budget by almost 20% over this period. Whereas LMU's ratio is more volatile, the upward trend is similar. Students and taxpayers might be forgiven for asking what their fees are supporting - the money is not being spent on employing teaching staff.

In 2011, undergraduate tuition fees were hiked from £3,000 to £9,000. The income universities received per student increased from around £6,500 to £9,000 for Arts and Humanities subjects (with a block grant, figures for STEM and medicine are higher). UK HE institutions continued to pour ever greater sums into buildings.

Fact 2: Staff costs have declined per employee in real terms

August 2008 marked a turning point in staff salaries. The end of a three-year pay deal coincided with a crash on the stock markets and a run on the banks. The employers decided that they were not going to match pay rises to inflation, and so began a period of sharp decline in salaries. Since employer pension contributions are paid out as a percentage of salary costs, a decline in pay also meant a decline in pension contributions. 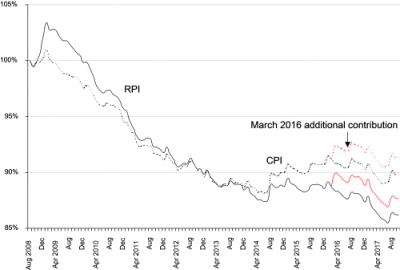 Before 31 March 2016, the employers contributed an additional 16% of salaries into USS, a figure that rose to 18% thereafter. For employers, this additional 2% contribution is equivalent to paying staff a 1.7% pay rise. As this graph shows, however, this increase is small compared to the decline in real-term value of salaries (including pension contributions) since 2008.

Even with the more generous 'CPI' measure, including the additional pension contributions, real-term expenditure per employee in October 2017 was 91.3% of the August 2008 figure. Against RPI that figure was 87.7%.

Conclusion: The employers can choose to pay more.