Located next to the Aquatics Centre and the ArcelorMittal Orbit, UCL East is an iconic – and well connected – location on the Queen Elizabeth Olympic Park in east London 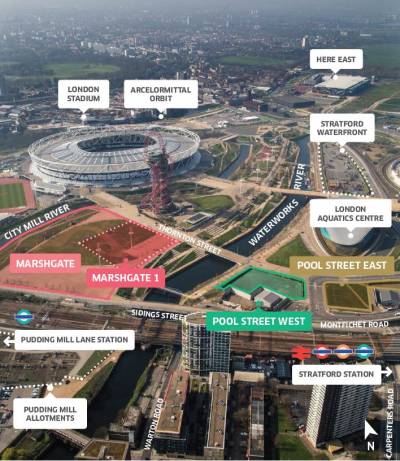 One of the attractions of the UCL East site is its excellent transport connections. The Park is served well by public transport, with a number of connections within walking distance. These provide connections to Underground, Overground, DLR, High Speed rail and future Crossrail services, with convenient onward links to major London terminals and a number of airports.

The closest stations to the Park are:

The UCL East site is located closest to the Stratford and Pudding Mill Lane stations. Bus services are also available from Westfield Avenue and the bus station adjacent to Stratford Station.

It is 7 minutes on the South Eastern Javelin service from St Pancras to Stratford International, and 18 minutes from Tottenham Court Road to Stratford on the Central Line. These transport links will further improve with the arrival of the Elizabeth Line (Crossrail). It is also approximately a 40 minute cycle between the Bloomsbury campus and the Olympic Park campus.

The UCL East site will be predominantly car free. However, accessible parking spaces will be provided on site, including disabled parking bays and electric charging points, along with coach and taxi bays. There will be both long stay and short stay cycle parking.

History of the area

In 1868, the area was largely agricultural. Adjacent uses included a gasworks, a brick field, a spinning mill and nearby railways on the embankment. By 1893, a number of light industrial premises (Victoria Oil and Candle Works, Varnish Works, Oil and Chemical works and Hudson's Bay Fur and Skin works) occupied a vacant area of land to the south including the UCL East site. From the end of the 20th century until the early 2000s the site was used as a scrap yard.

The wider site was subsequently developed for the London 2012 Olympic and Paralympic Games. The Legacy Communities Scheme (LCS) planning application, which was approved in September 2012, is the overarching scheme developed to guide the long-term development of the Olympic Park and its neighbourhoods after the Games

Building on East London's reputation as a trailblazer in design and creativity, and inspired by the vision for the legacy of the Great Exhibition that created Exhibition Road in Kensington, the Olympic Park now plans to make its name as a new centre for attracting and nurturing talent and industry. The Cultural and Education District will create a world-class destination, bringing together outstanding organisations to showcase exceptional art, dance, history, craft, science, technology and cutting edge design.

The Park is fully open to the public, and has attracted over four million visitors to its venues, parklands and waterways. World leading sporting events have also returned, including the Tour de France, Rugby World Cup and the IAAF World Athletics Championships.

UCL East will be an open, accessible and engaged university campus. Start a conversation with us and find out more: